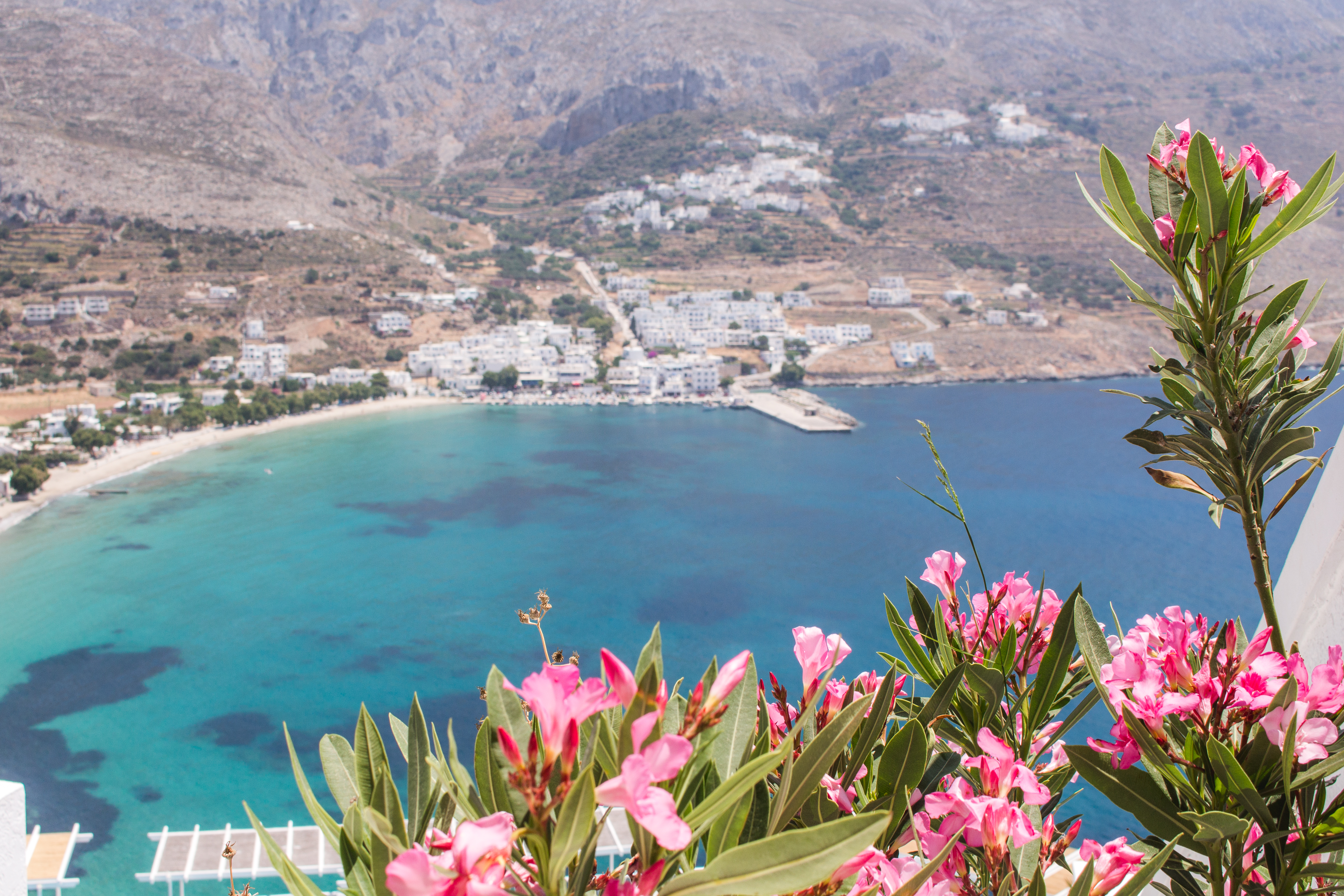 ‘Amorgos Island is where peace and quiet blissfully converge’ says Forbes magazine. It is really hard not to agree. It feels like the time stopped running on this island. Since antiquity, this secret Cyclade island has intrigued international travellers, traders, pilgrims and now – brides to be as well. At the same time, Conde Nast Traveller goes by the title ‘ the fairest of the Greek islands’. It is often described as a hidden island FOR a reason. Amorgos is an ‘unspoiled island’ at the south-eastern edge of the Cyclades group. The traditional customs are still present and are interwoven into a landscape as rich in beauty as in its history and culture.

‘It is the most intriguing of all the Greek islands, turning up surpises wherever you look’ says Rachel Howard, A British artist.

How did I hear about this island? It was November last year, I attended one of the Greek Tourism Board conferences at the World Travel Market London. I saw some wonderful photos and heard some of the most astonishing stories, so naturally – I had to go and see it for myself. It seemed like a perfect wedding destination!

How to get to Amorgos?

It is very easy to travel among the Cyclades these days. Sadly, Amorgos does not have an airport but no worries – the island is easily reached with daily ferries and high speed vessels Sea Jets from many differenct Cyclades as well as Athens and Crete. I always travel with this company as it is also the most convenient. They have 29 ports around the Aegean, and 250 interconnections. They operate 8 months of the year, which is considered the ‘season’ in Greece. The company is continously developing its fleet and was voted number 1 highspeed ferry company capacity-wise in the world!

Athens International Airport (ATH) is the most convenient to arrive. But you could also fly to Santorini, Mykonos, Crete ( or where international flights are operated).

I would your ferry in advance in order to assure you and your wedding guests could all make it to Amorgos for the big day.

Apart from the hidden paradise-like beaches with the crystal clear water and many other attractions, such as diving, cycling and trekking, there are several sights you have to see. The whole island is a great wedding photoshooting location but we have fallen in love with Chora, which is also a capital village of Amorgos.

Chora is a medieval village, situated 400m above sea level. It is an amazing village hidden behind the mountains, dominated by a 13th century Venetian castle, the Kastro. Surrounded by tiny windmills and full of beautiful Byzantine and early Christian churches and chapels, typical Greek white houses and stone paved little streets, this little wonder reminds of a labyrinth and has an incredible and particular atmosphere. The main square is full of tavernas where you could taste authentic Greek specialities, local cafes and tiny supermarkets where you could purchase some olives, tzatziki or homemade bread. There are no hotels in this calm little town, so the only way to spend the night in this amazing atmosphere is to look for one of the many rooms to let, which makes it even more special!

Katapola is a port of Amorgos island and one of the largerst natural harbors in the Aegean Sea. We did not have enough time to explore this little gem but its yacht-filled shoreline of a picturesque bay looks incredibly charming.

Aegialis is a small fishermen village and the second largest port of the island, after the port of Katapola. Aegiali is found within a distance of 15 km north east of Chora and it is known as the nightlife spot of Amorgos.

Aegialis Hotel and SPA – an ideal place for your wedding.

We were staying at Aegialis Hotel and SPA for about 4 days and it was an idyllic stay! Everything from the spacious rooms ( we had a standard room with the view) to a delicious Greek breakfast seemed very well-planned in order to bring the so-called ‘Greek dream’ to reality.

Aegialis Hotel and SPA is the largest and the only 5-star hotel in Amorgos, known worldwide as the perfect yoga retreat! It was described by some of the most prestigious magazines, such as Forbes and Brides Abroad.

To me and my sister, the hotel is a perfect combo of a luxury (not the strick tie and high heels luxury but a laid-back elegance), a typical Cyclades charm and an idyllic namaste vibe (my friend Pol would love it!). The swimming pool overlooking Aegialis bay is definitely a highlight, too.

Another very important thing I really have to include this article is the impression of their staff. Martyna and I both spoke to members of staff and we both agreed… we have never met a better-bonded people. Every single person who works there really loves the place. You can tell they get on well with each other and with the guests. I think it is a very important factor when choosing a wedding location.

As for a wedding at Aegialis Hotel and SPA, there is no minimum nor ‘maximum’. You could either host an elopement of two people + witnesses or a ‘big fat Greek wedding’ but the capacity of a hotel is 150 guests, while the largest wedding reception was 300 people. BUT. Everything is manageable at Aegialis Hotel and SPA. The property has 27 years of experience in weddings and a few years in destination weddings but they are constantly developing their offer. They have in-house wedding planner, decorators and musicians. Imagine traditional Greek music on your big day… what a dream! Irene, the planner, ensures the couple gets the most of what they are planning to achieve. There are countless options for a ceremony – it could either be the local chapel, a rooftop, one of their magnificent dance halls with the view or anything the couple would want. Your reception could be held at the beach (they own a beach club), large swimming pool (set 60 m above the sea level) or in the garden.

Let me paste you the wedding offer I was shown:

I would recommend at least 5 days in Amorgos where you could not only enjoy the hotel but explore the whole island. The best period of coming to the island June and October but November stays are also possible ( you would have to make sure the ferries are still operating). The high season is said to be July-August and it ‘cools down’ in September while it is still extremely busy in Mykonos and Santorini. In fact, these two iconic islands are around 2-2,5 hrs from Amorgos so you could also plan the island hopping while in this paradise. The options are many!