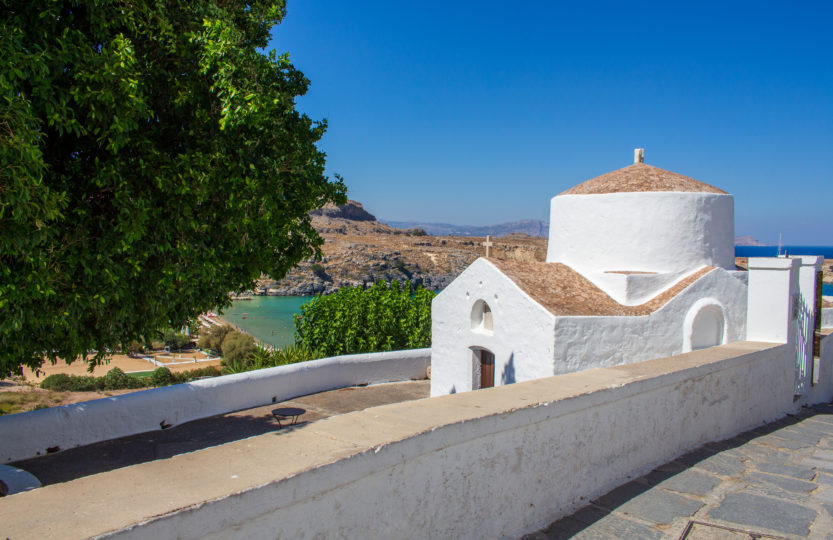 I would never have imagined Rhodes being so exciting. The island is located only about 18km east from the Turkish shores, 350 km north from Crete and around 500 km from Athens. The location makes it a perfect ‘target’ for island hopping! It is the 4th largest Greek island historically recognised for one of the Seven Wonders of the Ancient World, The Colossus of Rhodes. This large Greek island is interesting under loads of aspects but mainly because it is such a diverse place. It offers a lot for even the most demanding travellers and honeymooners.

Rhodes is great for hiking, cycling, diving and sightseeing. Road trip? Great idea! There are a lot of car- and motorbike- rental companies around every major town. I counted 5 of them on Faliraki main road!

Our stay was rather short but I am quite happy about the outcomes as we managed to explore quite a few great sights and stay in 3 major cities – Rhodes Town, Faliraki and Lindos.

As Rhodes island is an ideal base for island hopping, its capital would obviously be a ‘perfect’ base for the tourists. The airport connections are great – it takes about 15 minutes and is a cost of around 25 EUR. Whether you are renting/travelling by cab or public transport, everything goest through Rhodes Town.

Some people say Rhodes Town is tiny enough for it to be a day trip. I dare to disagree! Medieval Town of Rhodes – the oldest inhabited medieval town in Europe. Historically, Rhodes is internationally recognised for one of the Seven Wonders of the Ancient World, The Colossus of Rhodes. Its exact location remains unknown but I heard the rumour they are planning to recreate the statue in the future… hmm? Nowadays, Rhodes Town is known for its countless sights, such as Mandraki and the Castle but really… there are over 200 streets and alleyways where you could get lost without having a major itinerary as this is the best way to get to know the city!

As for the city breaks, I would always choose boutique hotels over huge resorts. I found a perfect place for a 2-day stay in Rhodes: In-Camera Art Boutique Hotel, a small hotel owned by an amazing photographer, Mr Nikos Kasseris and his daughters. This is truly one of the greatest findings of my blogging list. This hotel LIVES! In-Camera has a soul and the whole loads of stories to tell. Every suite is named after the place Mr Kasseris used to work at and is..incredibly photogenic (in Camera perfect!). Apart from that, every room features a small exhibition of cameras, which as personal tools Mr Kasseris used to work on in the ’70s, ’80s and the early ’00s.

The decor is a fusion of sharp modern art, nature and traditional Greek architecture. There is also a lot of greenery – giant ficus trees that look like huge umbrellas and ‘iconic Greek’ pink bougainvillaeas. Despite the fact the hotel is located in Medieval Town, I really had the ‘in the middle of nowhere’ feeling.
I already miss my slow mornings on the spacious patio with a private jacuzzi and our own little garden with the view – it is called ‘The View Of Rhodes’ for a reason! I also miss the Greek breakfast – fresh feta cheese, pastries, delicious Greek yoghurt paired with a rich in flavour Rhodian honey!

The hotel has been granted with a number of certificates and rewards, such as Trip Advisor Excellence in 201 which is one of the most ‘honest’ achievements as it really shows the guests were thrilled with the whole experience at In Camera.

In-Camera Art Boutique Hotel is also an ideal place for honeymooners as the suites offer privacy, intimacy and the staff is open for any suggestions and ideas regarding the honeymoon packages.

Further recommendations? There is a lovely floating restaurant called ‘Kontiki’. We stepped in and have fallen for the vibe and the views, which are probably one of the best ones in Rhodes Old Town! You would have the castle on your left, and the whole harbour on your right. The restaurant is hard to miss, it is located just off the harbour.

Another place to be is Cook’s Club City Beach Rhodes, located on Elli Beach in the heart of Rhodes. I love the boho interior and the overall Bali-like vibes! Great place for evening cocktails or a cold frappe in the afternoon.

Next stop would be Faliraki, ‘Rhodian Ibiza’, party place. It is a small town located around 20 minutes driving from Rhodes Town. To be honest, I am not the biggest fan of this town but there are some perks of staying there for sure. Pricewise, it is a lot more affordable than Rhodes Town and Lindos. There is a wide massive beach and the famous Anthony Quinn Bay is a stone’s throw from the city centre.

Most of the places are very crowded party venues but we found a lovely beach bar, around 15 minutes walking from the city centre, and just off the main part of the beach. Great interior and exterior, fabulous music and crystal clear water!

Do you know Greek the Zorba? This paradise-like Bay was named after Anthony Quinn, who played Alexis Zorba in this iconic movie from the ’60s! This beach is a must-see among all the must-sees in Rhodes. We got there a bit early, around 9ish and I recommend you to do the same as it gets as crowded as Oxford Street does during London’s rush hours 🙂

There is also a beautiful newly opened beach bar, right off Zorba Bay (this is how I call it). I would definitely recommend to step in for a coffee with the view as it featured the best views in the area paired with some great macrame swing decor. We loved it!

A trip to Greece can not be completed without a boat trip – no matter if it’s a small sailboat, yacht or a cruise ship! We had a lovely sunset cruise while in Rhodes Town and, despite the fact it was rather short, it was a great addition to our trip. The most popular option is a group cruise to Symi island but, because of the pandemic, some of the group ships are not operating this year. I would recommend checking the website called Boat Advisor for up to date offers and information.

Craving Santorini-like views? Lindos should be your stop number 3 !

Lindos is a small town in the south of the island, probably the most known for the Acropolis. It is a very tiny place, walkable in a day but oh-so-stunning. The architecture would definitely remind you of the Cyclades, especially Paros, and the cosy little tavernas would make you wanna stop for a frappe every few steps. One day is definitely not enough! Apart from the Acropolis and the little harbour, there is also the beautiful St Paul’s Bay we only saw from the top (sadly), make sure you go there as well. Such a stunning little village!

As I previously mentioned, Lindos Blu is an ideal retreat for adults. The hotel is located only about two minutes drive from Lindos and is set on a hillside overlooking Vlicha Bay. Lindos Blu is placed on a hillside and it is created and built to resemble the Greek amphitheatre which means every suite is facing the endless blues and the beautiful Vlicha Bay, no garden views, no exceptions. Isn’t it wonderful? I wrote the whole separate feature about this place, check it out under this link.