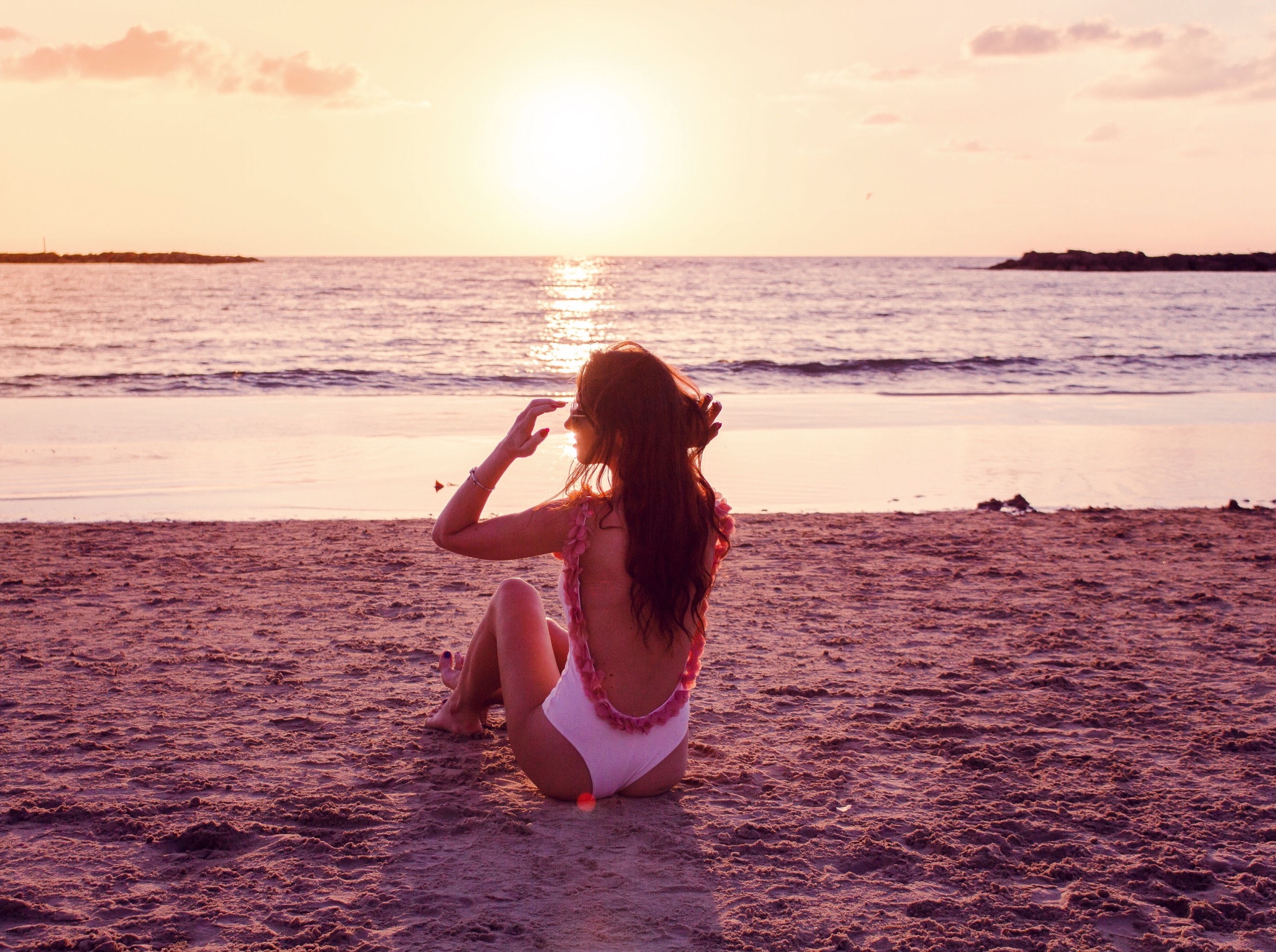 Tel Aviv-Jaffa is the unofficial capital of Israel. It is where the business district with all the majority of banks is based. The city is simply ‘taken as’ the financial and technological center of the country. Tel Aviv-Jaffa is also the second largest city in Israel, and a very popular destination for the central European countries and the UK. Why? The low-cost airlines, such as WizzAir have recently launched quite a few affordable connections between the major European cities and Ben Gurion Airport, which undoubtedly IS the main reason of Israel to become one of the hottest places to see in 2018.

First things first – Tel Aviv is on the 17th most expensive cities in the world. It is pricey – in compare to the European destinations, such as Madrid or Barcelona, but it is not as expensive as Norway. An average price for a dinner is €30 per person. Food and beverages in the shops are also costly. The prices reach €5 for a bottle of water. What I think is affordabel is the transport. The taxi to the airport from the city center is the cost of €30, while the train ticket was around €5.

Tel Aviv-Yafo (or Jaffa) is the official name of the city. Jaffa is a Muslim district (former city) with its beginnings reaching back to 4000 years ago. It is now one of the major sights of the city.

Aparthotels are the most popular form of stay in Tel Aviv, from what I have observed. This is a perfect option for the people who want their own space. Best Western Regency Suites is an Aparthotel, which means it has a reception desk, but is also self-catered with a place to cook – in this case a cosy kitchenette. It was our first stay at an aparthotel, and we loved the experience.

Best Western Regency Suites is voted one of the best hotels in Tel Aviv, according to Booking.com. The hotel is located in one of the best districts of the city, very close to the main sights. It took us around 20 minutes walking (along the promenade) to the Carmel Market and around 30 minutes to Jaffa. The Frishman Beach is places just in front of the hotel, around 2 minutes walking ( you would have to cross the street).

Hotel Regency Suites is also situated just in front of the US embassy, very close to the shopping malls, fashionable boutiques and art galleries.

There are also loads of different Israeli coffee shops and bars located within a 5-minute walking distance from Best Western.

The breakfast served in a hotel was delicious and what we love the most – including of some regional specialties, such as halva, tahini and hummus.

Best Western Regency Suites is a perfect choice for :

We had a very pleasant stay! 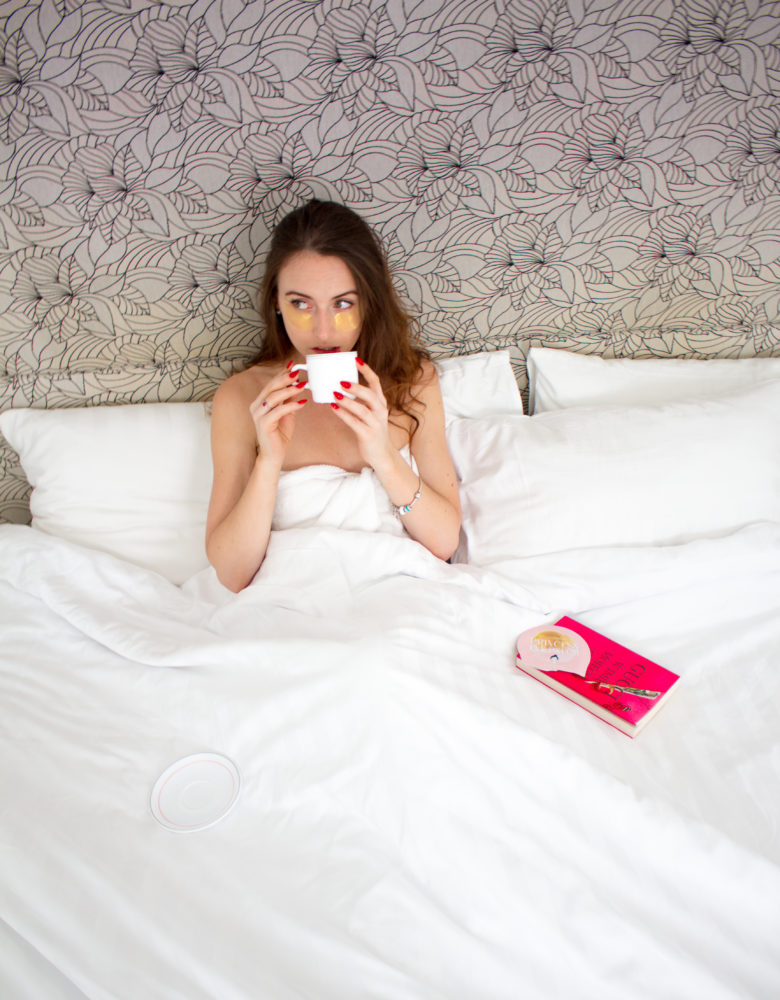 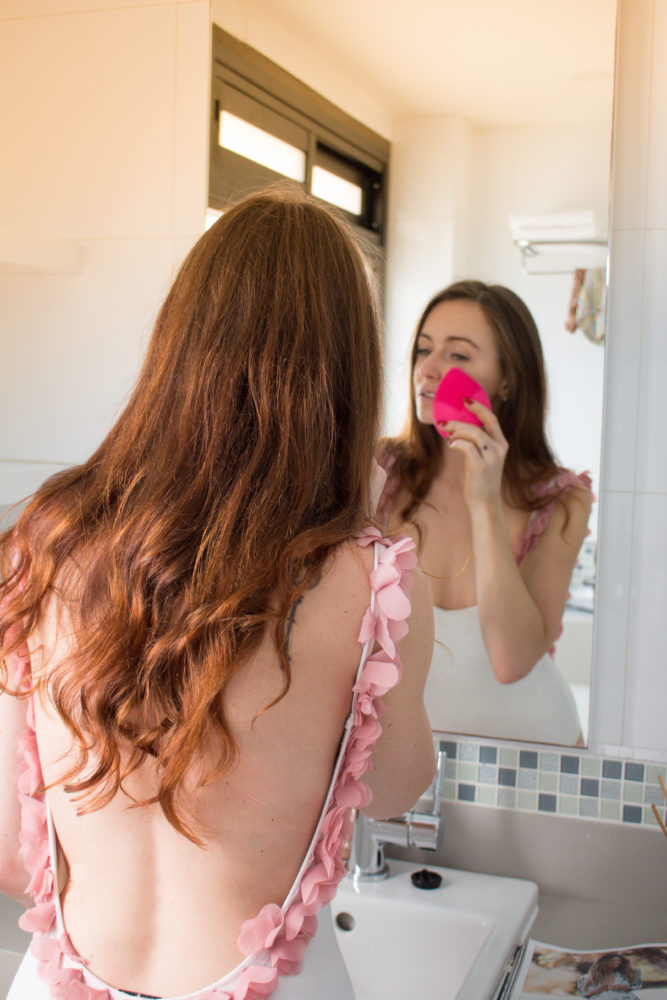 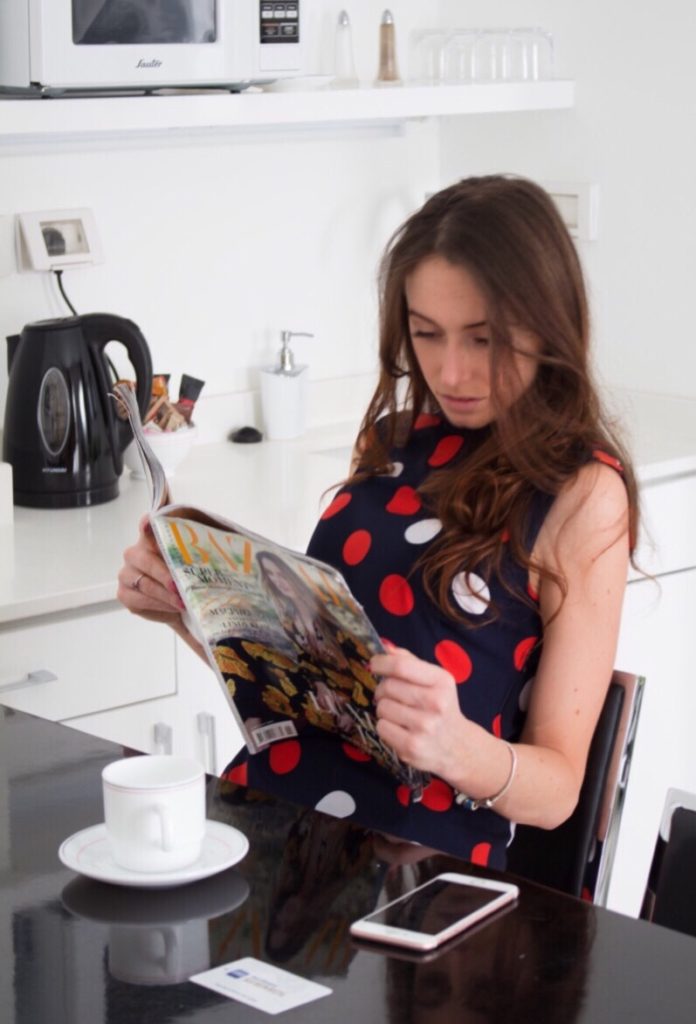 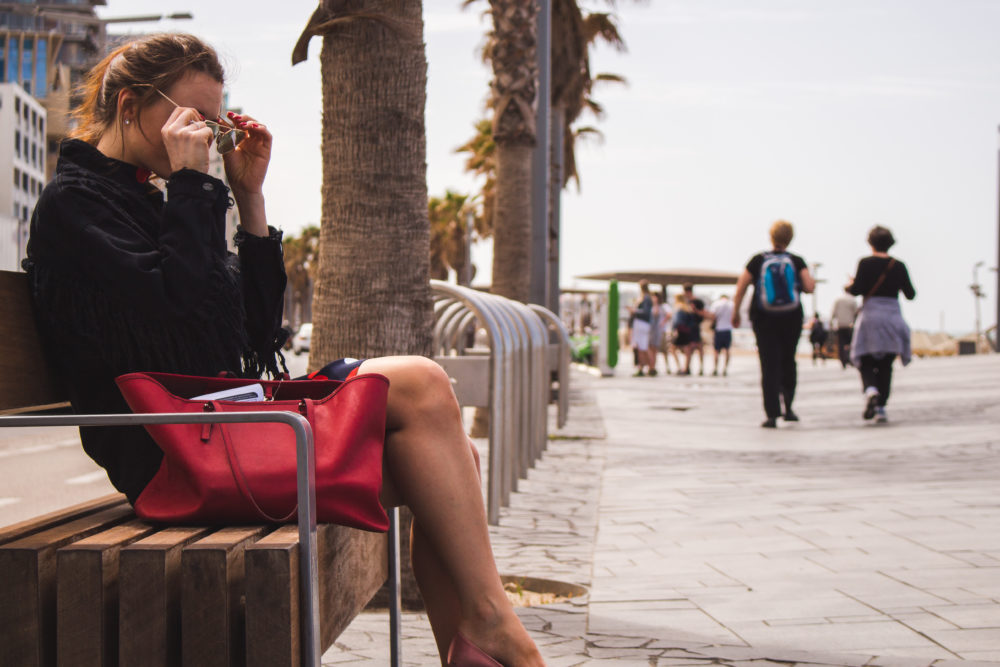 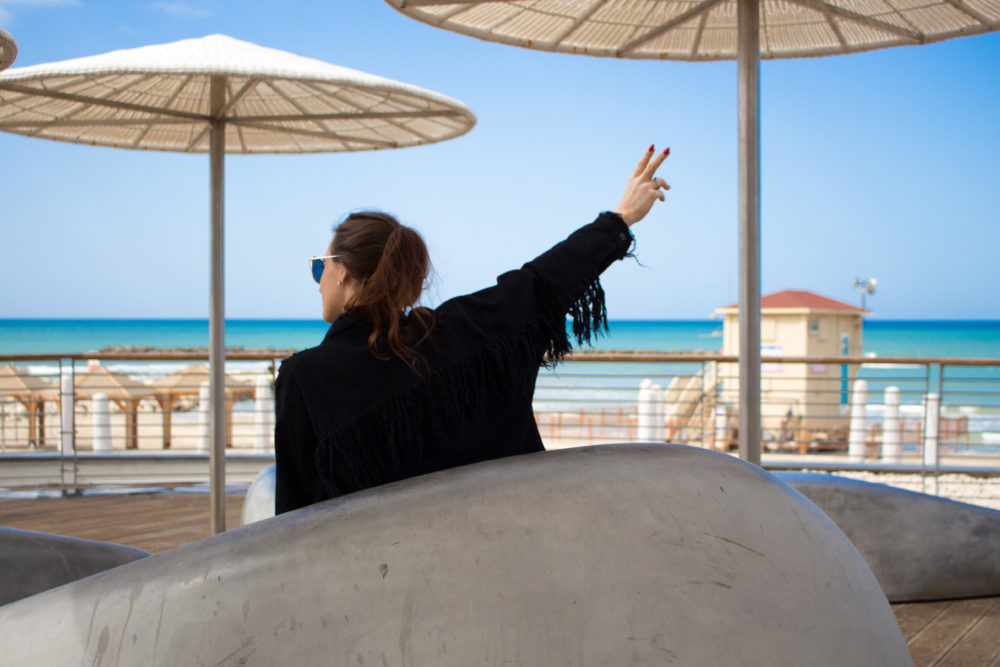 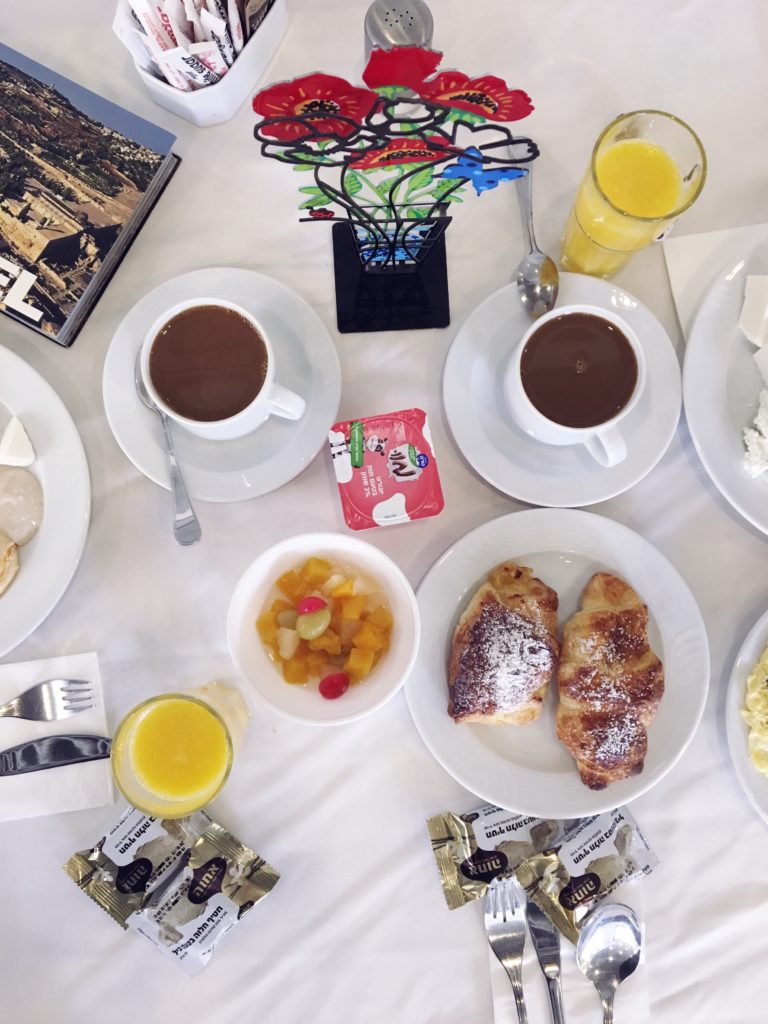 The Beach and the Promenade

National Geograhic voted Tel Aviv one of the TOP 10 Beach Spots in the World in 2013.‘Call it Miami Beach on the Med. Tel Aviv is the Dionysian counterpart to religious Jerusalem.’

The Coastline is quite long – 14 kilometers. The walk along the promenade is a lovely activity and what I loved the most about Tel Aviv. There are loads of activities you could possibly do on the beach and in the area. Cycling is one of the most popular ones, but Tel Aviv is known for having one the best surfing features in MDA – the Gordons Beach is a must for surfers.

There are also the whole loads of bars and restaurants, where you can step by for a coffee with a view. I also enjoyed watching people having yoga, and the view of the colorful kites. Does it look like South Beach in Miami? They really do look similar, with the magnificent line of sky scrapers right behind them. The beaches are both wide and sandy, with kind of the same vibe about it. Take a look at my Miami Beach post here.

What I also like about the promenade is the modern art design of the benches – you really can tell the city cares a lot about art. 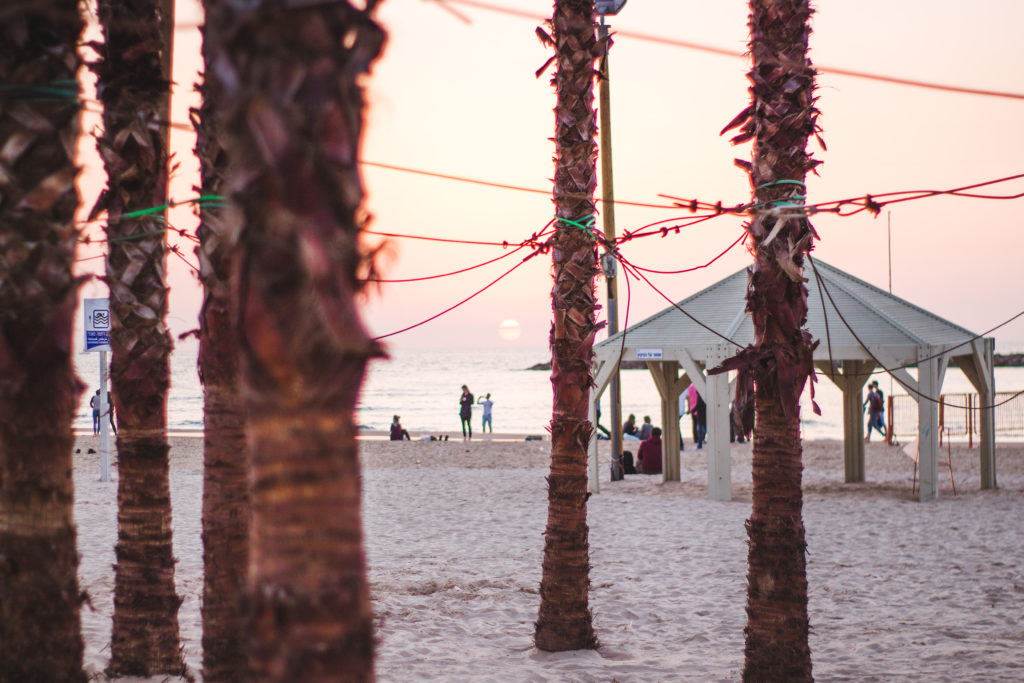 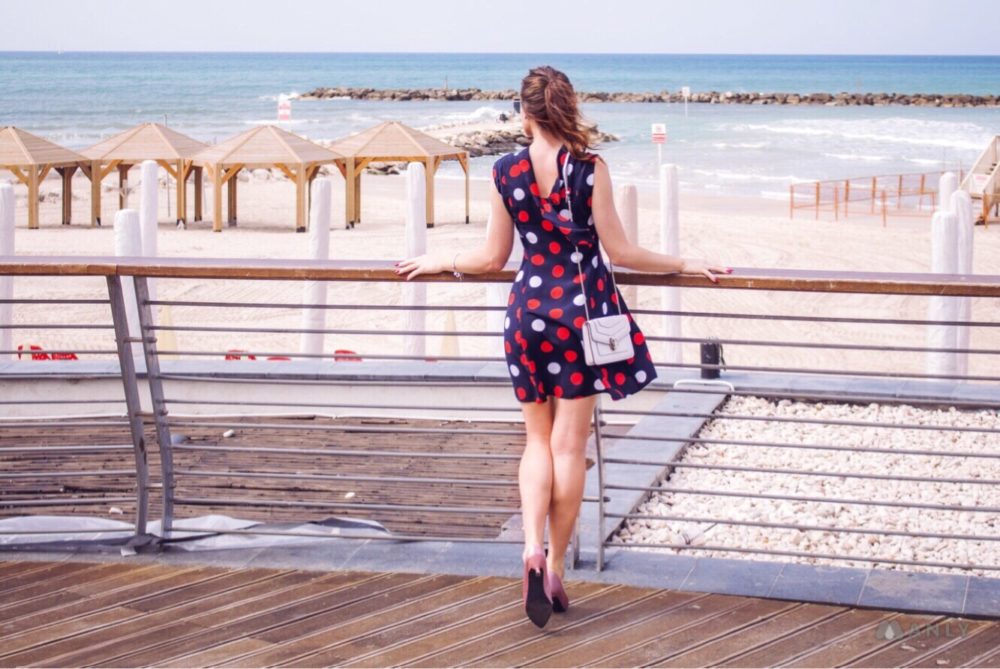 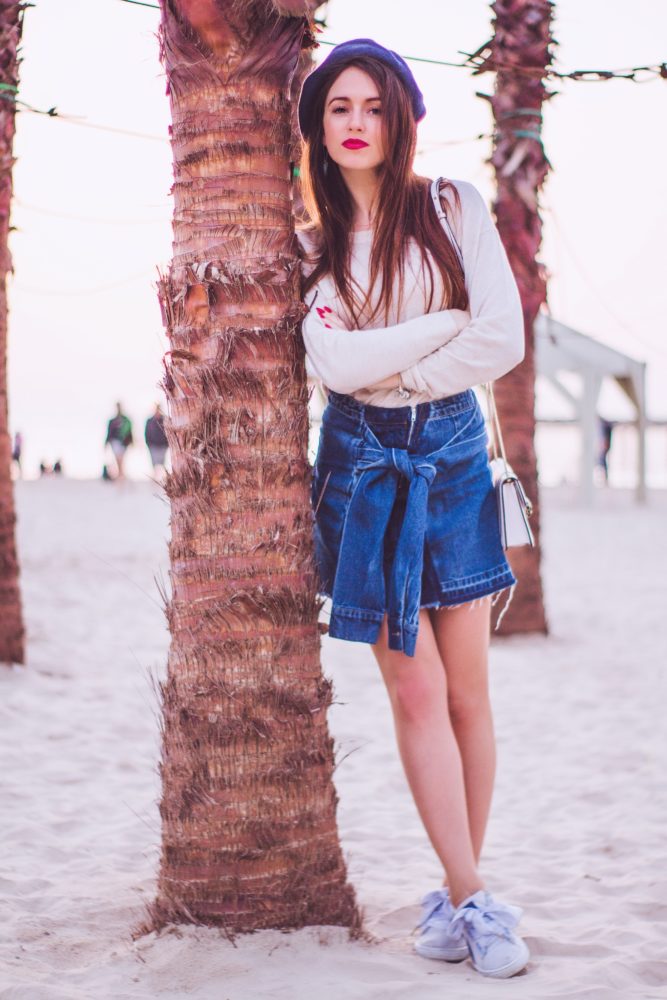 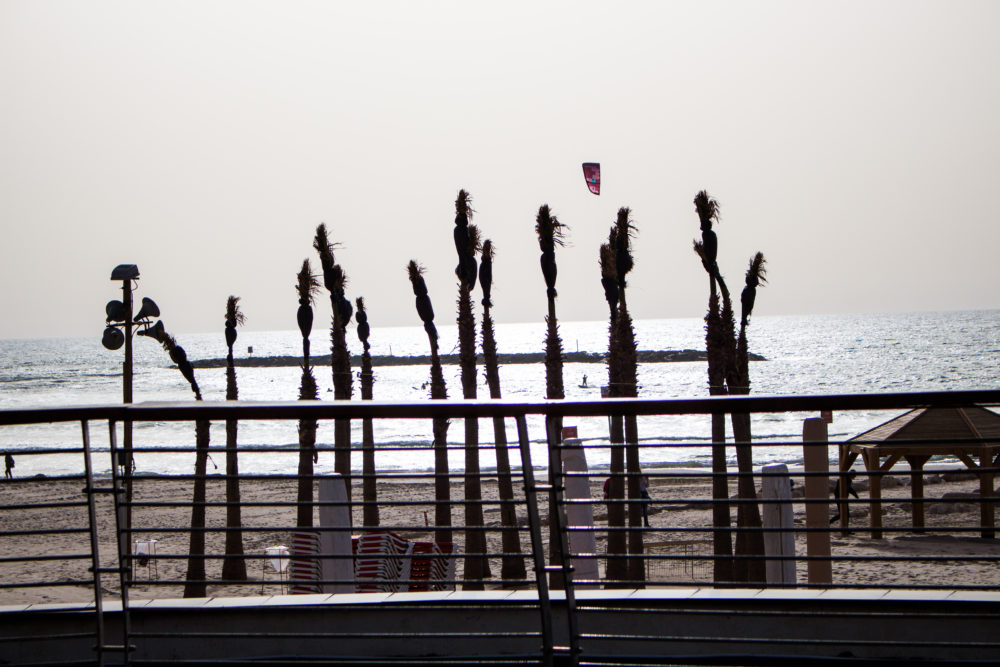 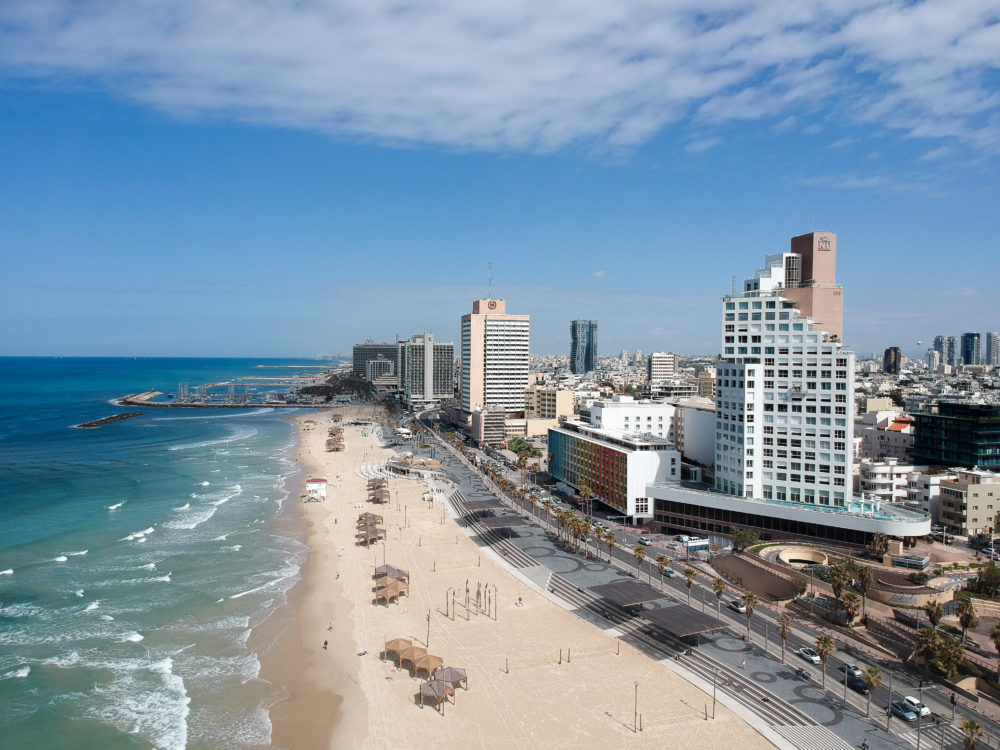 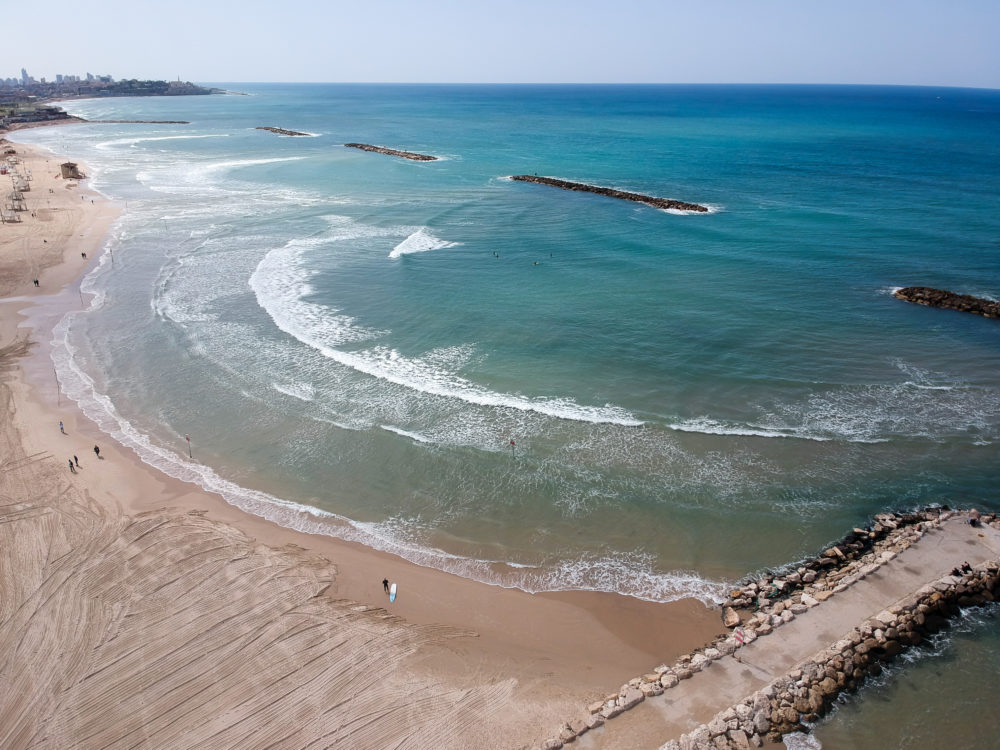 Tel Aviv-Yafo is a vege paradise! We were meant to take a part in a Vegan tour, but we had to cancel. Such a pitty! Not only the country is known for producing great Hummus, but the spices! Spices and dates are my numero uno of Middle East treasures!

I could not wait for the Carmel Market. I really loved exploring Dubai’s Souk (read about it here), so I presumed we will get to taste and see some new things. The market is extremely dirty and so to say ‘less organized’. We were, however, able to find what we came there for, which were…

…the spices! We were looking for the Za’atar, which is a mix of spices. It is a well-known spice in the whole Middle East region. People use it for the meat, vegetables and as a marinate for olives. It will undoubtedly give your dish an unforgettable taste! We were also looking for some dried fruits, such as dates as well as the Dead Sea cosmetics, such as mud and bath salt. The mud is way more affordable than it is by the Dead Sea – don’t forget to buy it while on the market!

Halva! Dont’ forget to at least try this Israeli speciality. I am not the fan of Havla, but my fiancé claims it is a really good one.

In general I am not sure whether I would recommend to eat in one of those small bars on the market. Also try not to visit Carmel Market in the evening, as it gets empty and people tend to just throw the rubbish on the street, right under your legs. Bare in mind the Market is closed in the Shabbat (Saturday). Unlike European markets, this one does not open on a holy day. 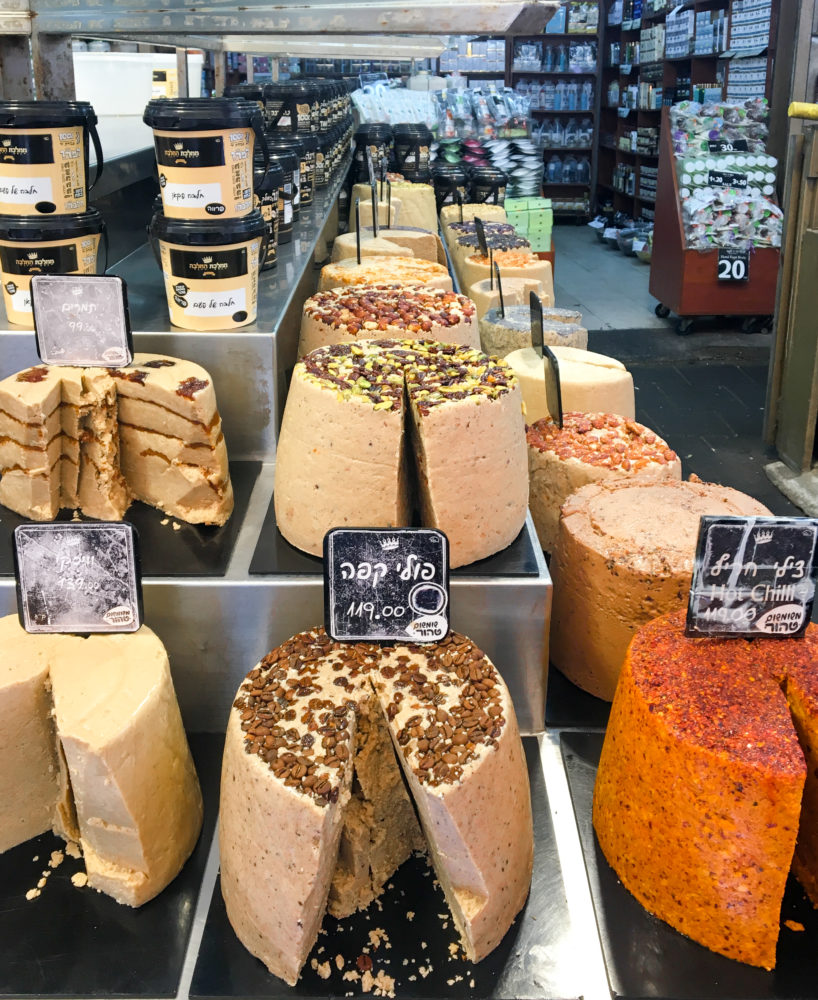 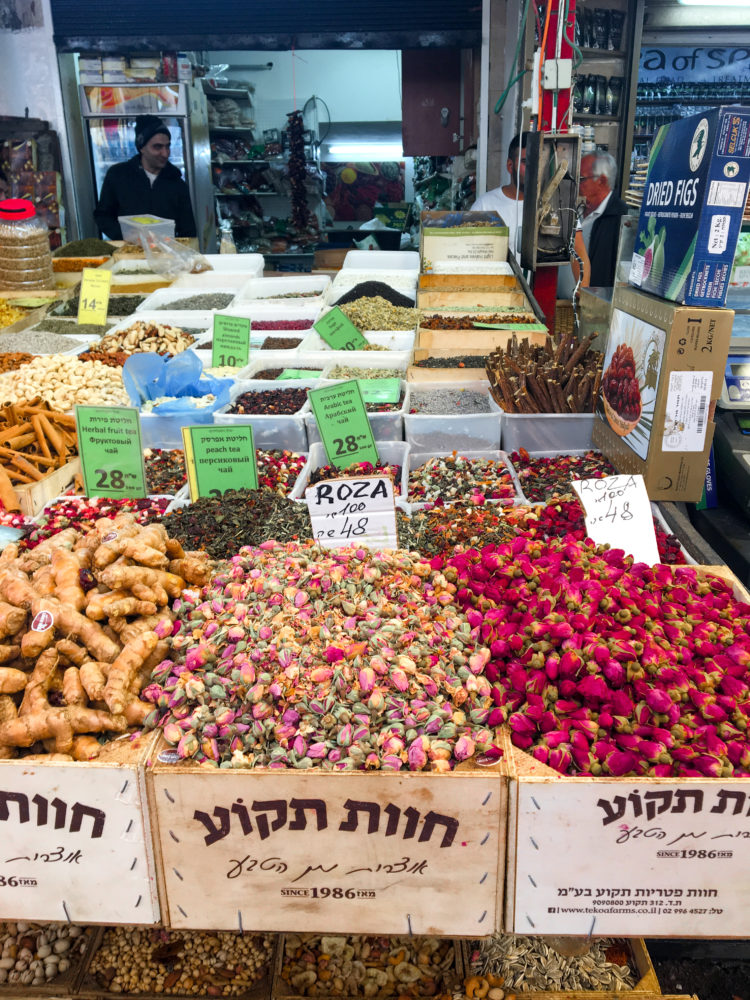 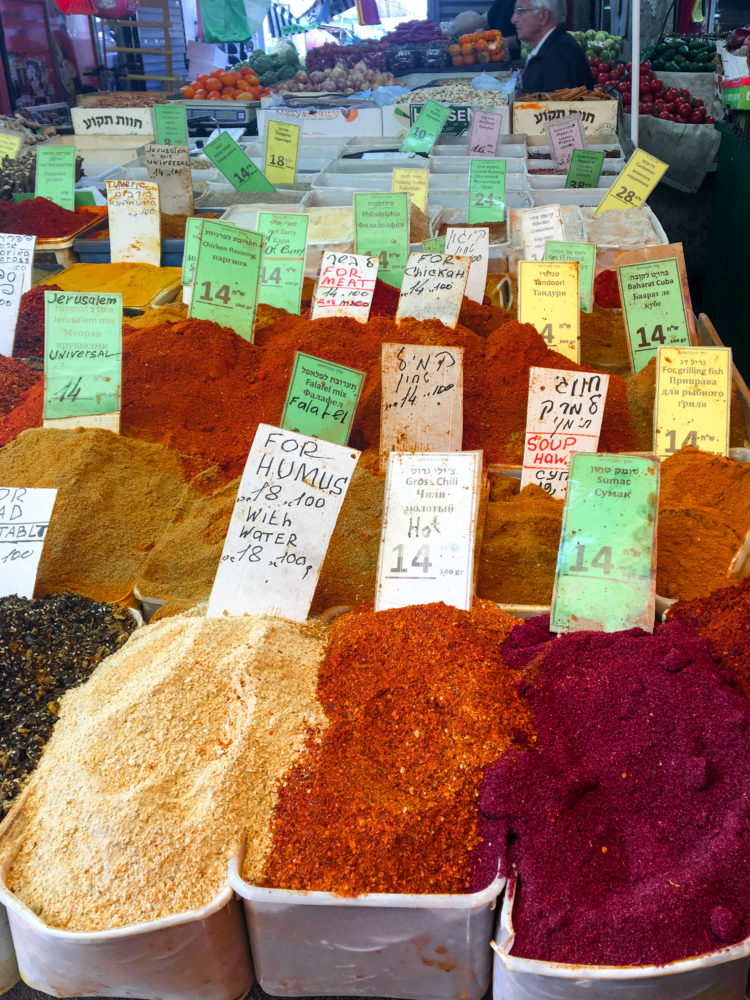 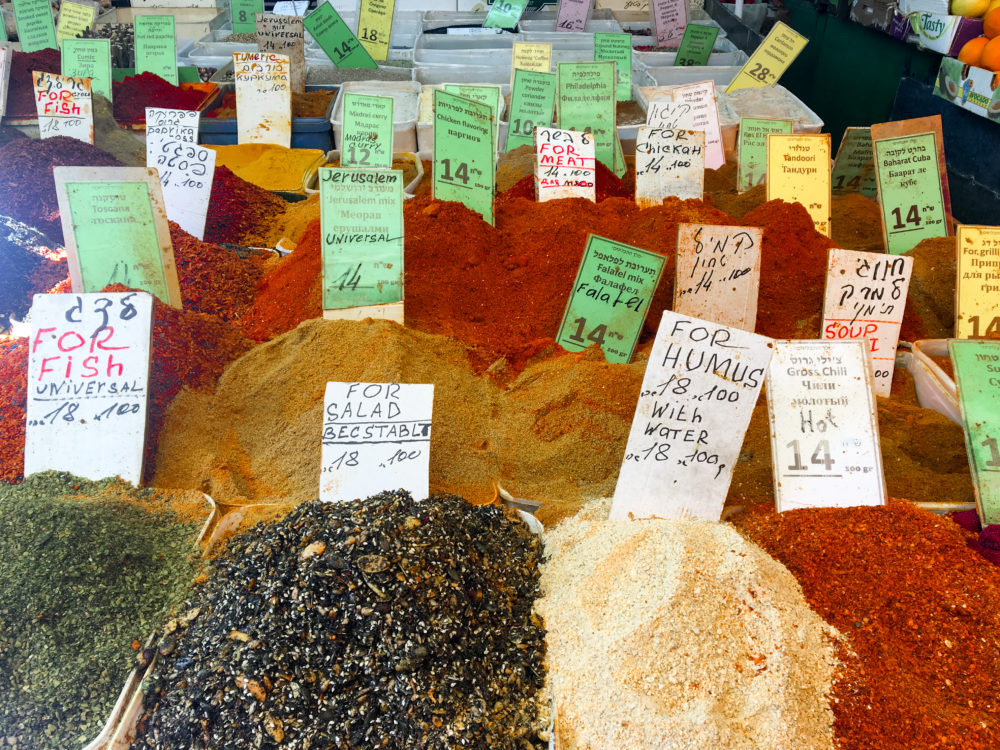 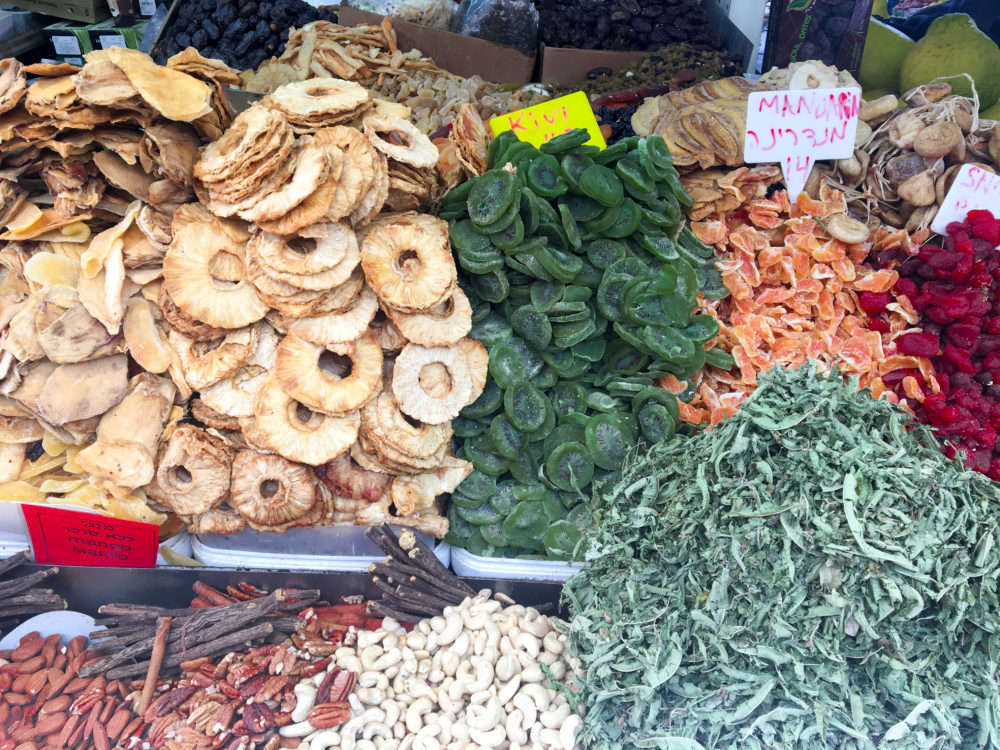 I am a great fan of colorful corners, lively boroughs and photogenic alley ways. It seems there is a Notting Hill in every city – in this case it is the borough called Neve Tzedek. One of Tel Aviv-Yafo’s oldest districts, but definitely the youngest by heart!

Neve Tzedek is one of the liveliest parts of the city, with previously mentioned colorful corners, chic cafes, avant-garde design stores, fashion boutiques and handicraft shops, as well as a weekly farmers’ market in HaTachana, a restored railway station. It is located not too far from the Carmel Market – around 10 minutes walking up the hill. 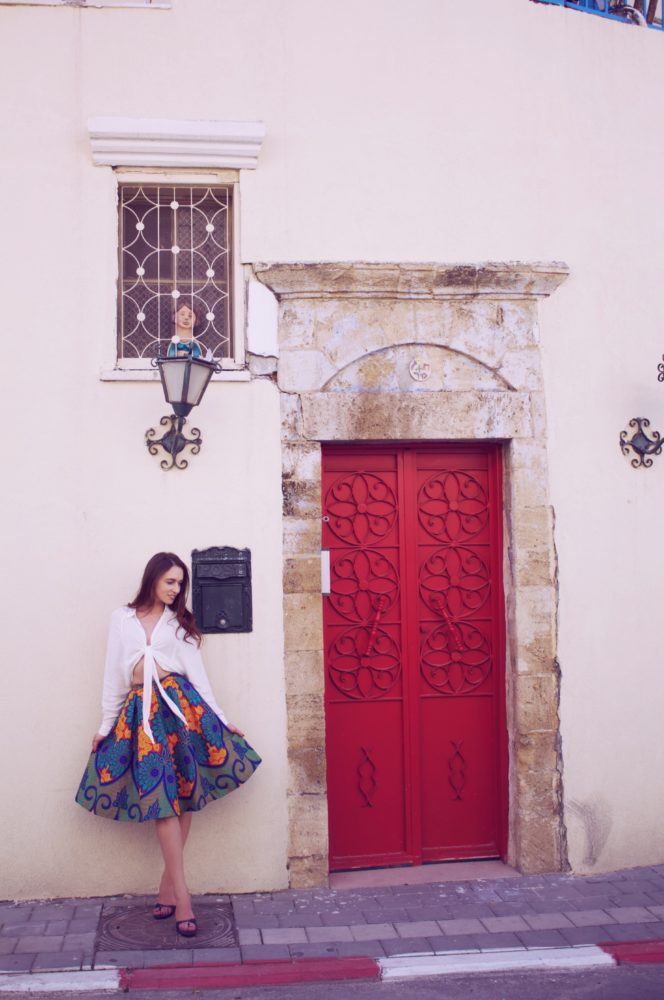 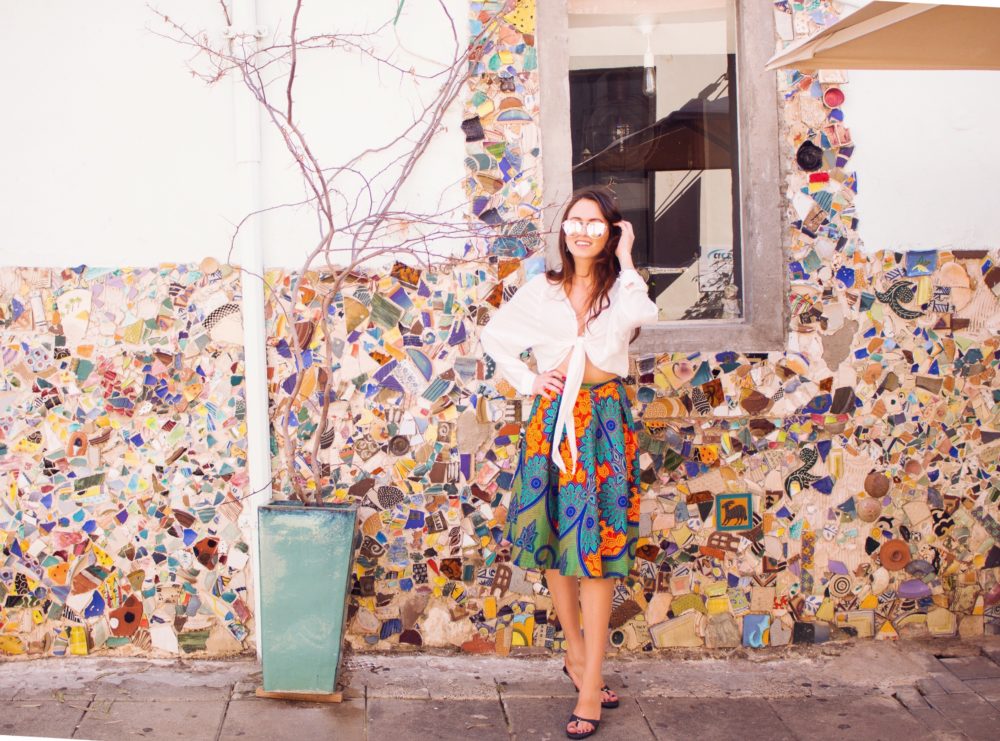 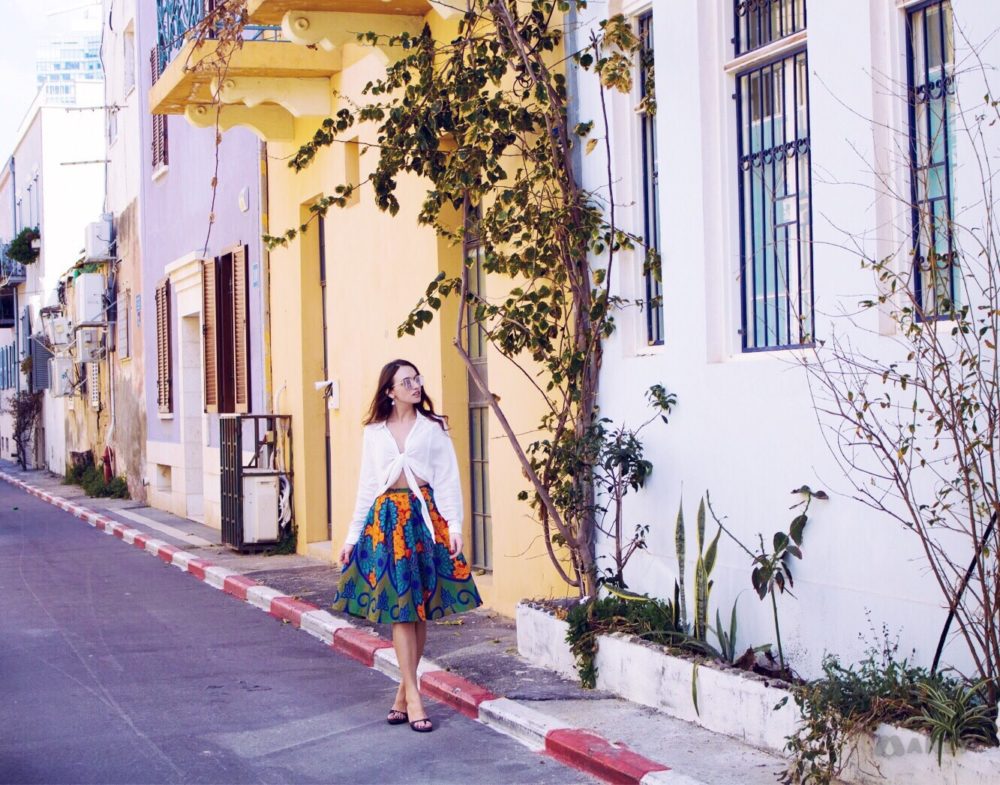 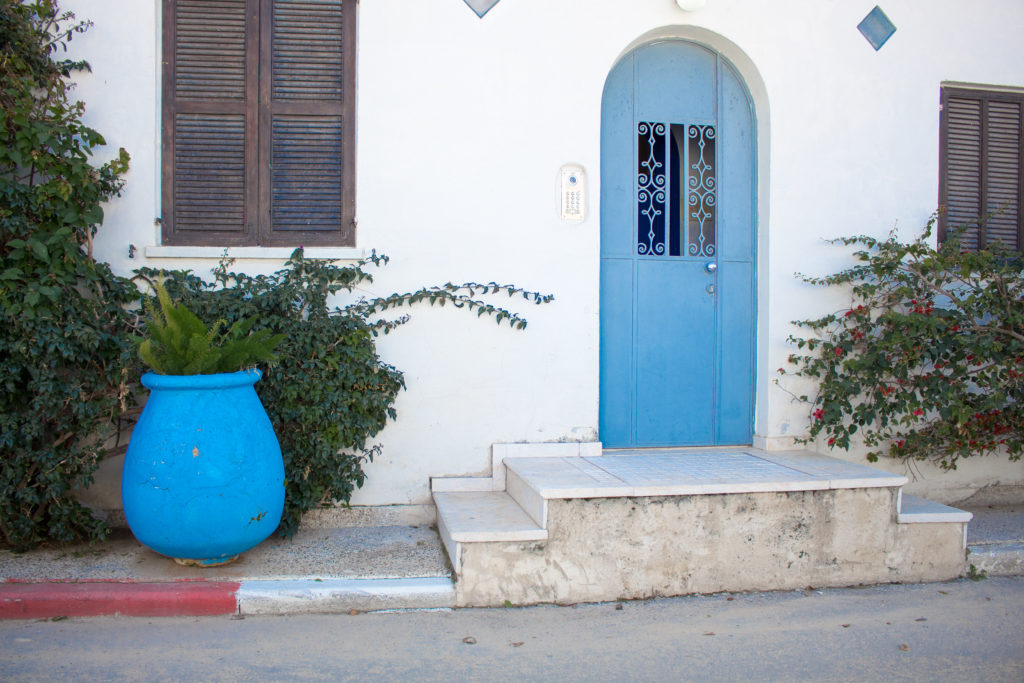 I wish I had more to say about this magnificent and breath taking hill! Jaffa/Yafo. It is an oldest part of Tel Aviv-Yafo (older than Jerusalem), with the ancient port city in Israel. Jaffa is famous for its association with the biblical stories of Jonah, Solomon and Saint Peter as well as the mythological story of Andromeda and Perseus, and later with oranges. Jaffa is located on a hill overlooking Tel Aviv and the coastline. The sights in Jaffa? There are so many! Being in Jaffa feels like you are in a museum itself, as every building is an ancient archeological sight (apart from the re-stored ones). The oldest part of the city is known for the Mosque, Flea Market and the Zodiac Bridge – the place where all your dreams will come true. You just have to find your zodiac sigh and make a wish 🙂 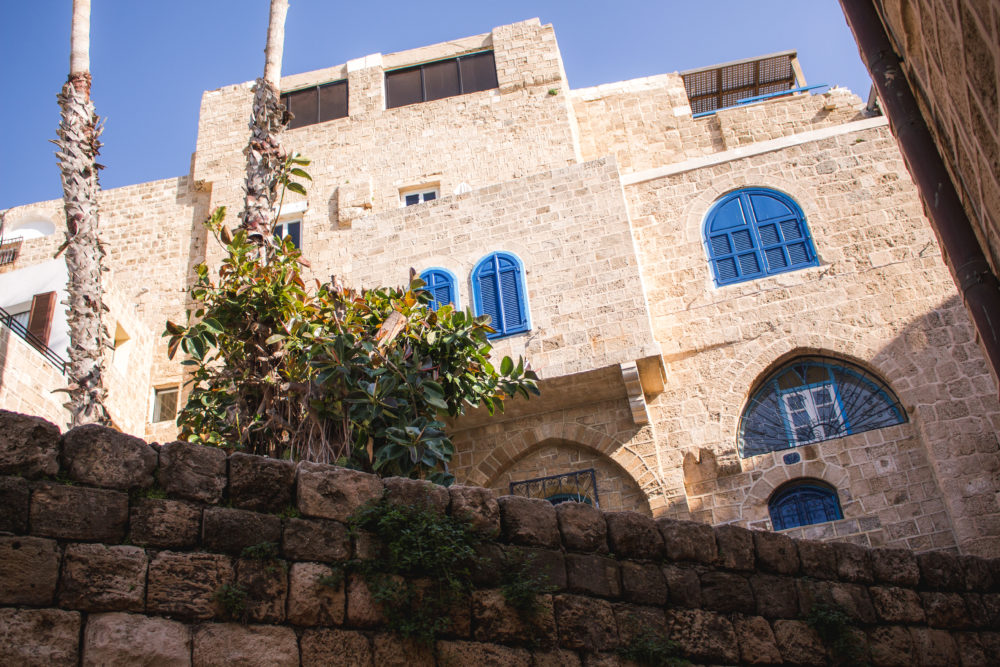 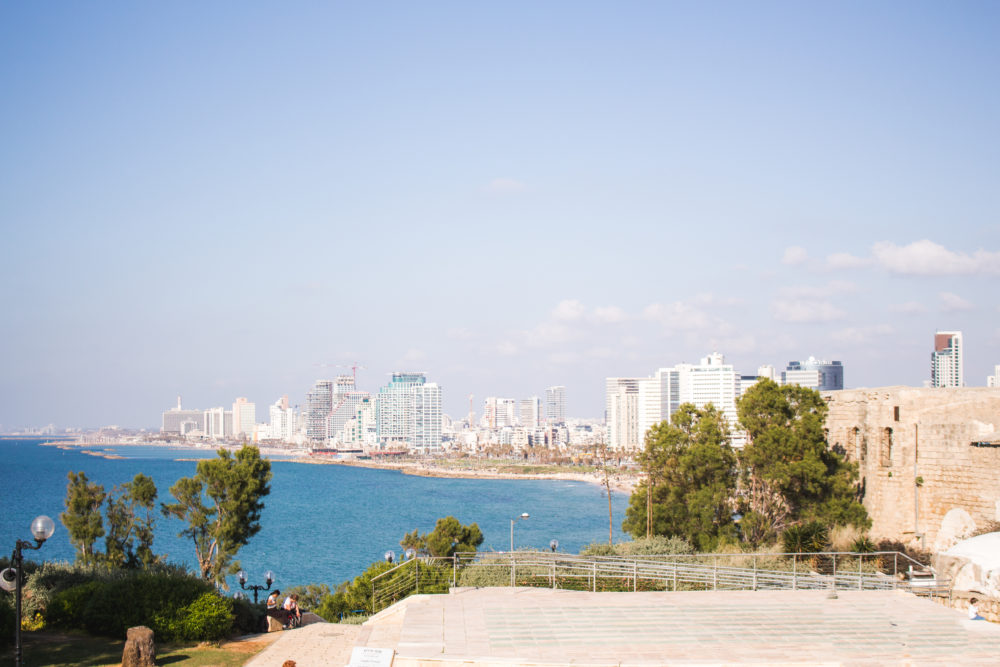 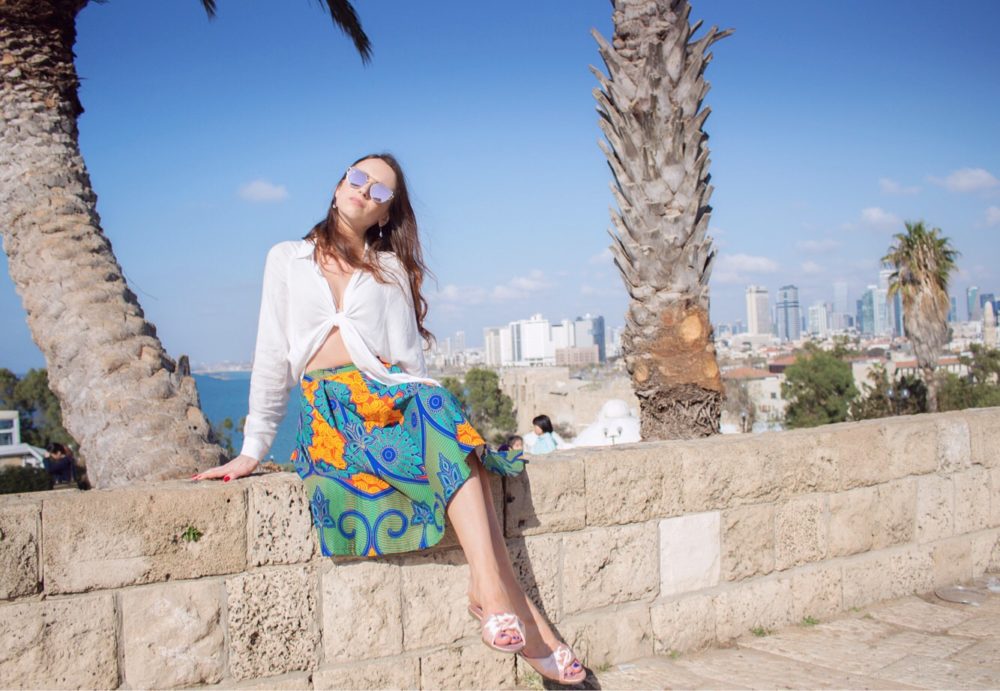 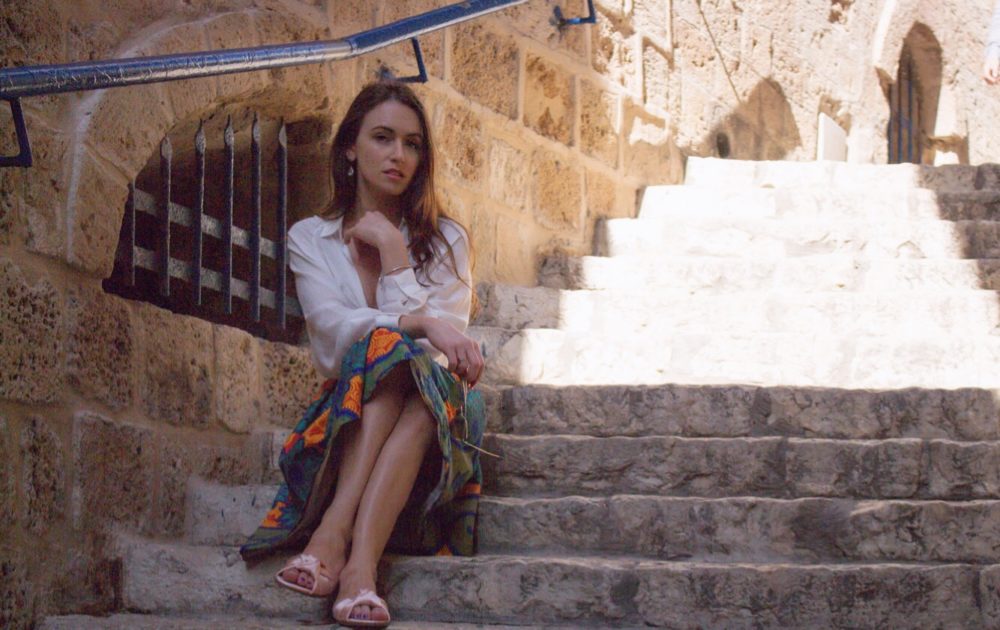 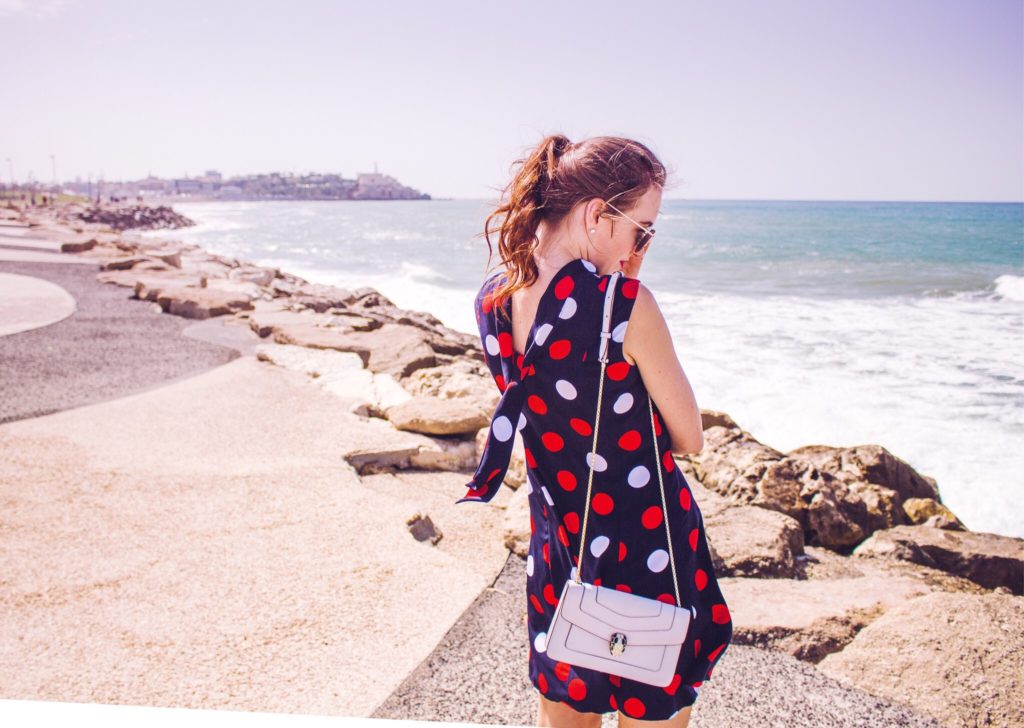 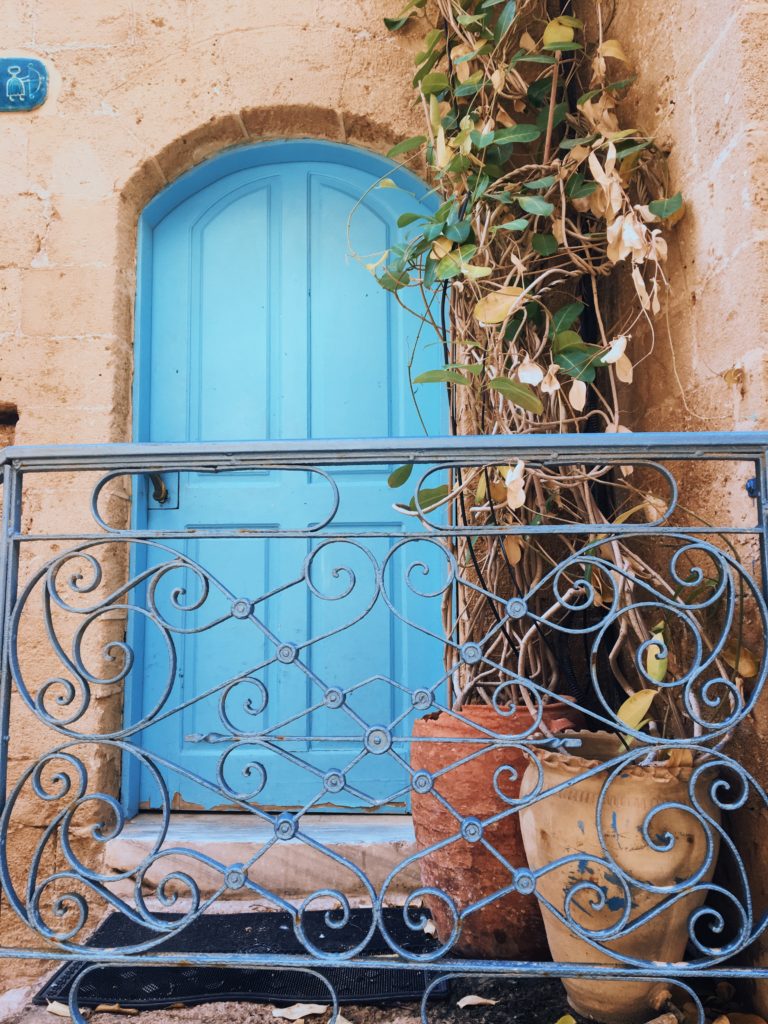 To me Tel Aviv-Yafo IS a city of contrast, but a in a different meaning to what I said about Dubai. Orthodox Judaism versus Gay Parade, wealthy beachfront versus poor city center districts, tourists versus young soldiering with a rifle. I don’t know, I am not sure whether Tel Aviv would make it to my TOP list.

Is it safe? Yes, it is. I felt very safe. Ten times safer in compare to where I live and work (London and Berlin).

Is it as expensive as people say it is? Yes and no. I tend to compare all the prices to London, and Tel Aviv is equally expensive as the capital of the UK. I was surprised about the cost of transport – very affordable.

Meat lovers – you won’t find your food paradise in Tel Aviv for sure. Although there are some meat options, the city is known for being a vegan friendly. You would probably see more of a vege choices in your lunch menu. 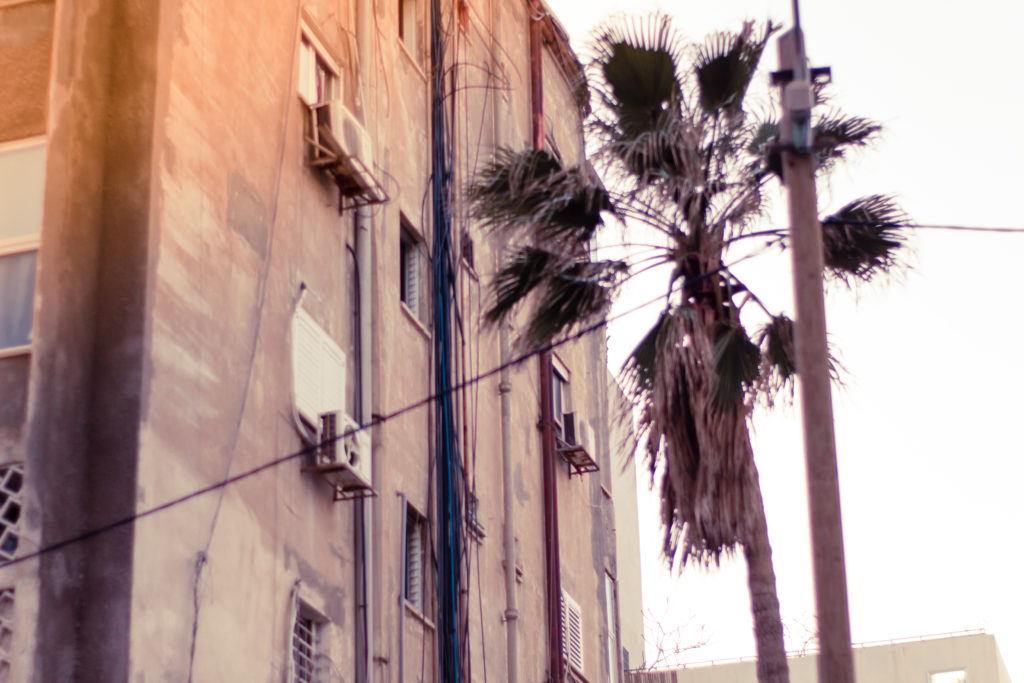 I would also like to encourage you to take a look at my Dubai Guide here. Middle East vibes for the win!