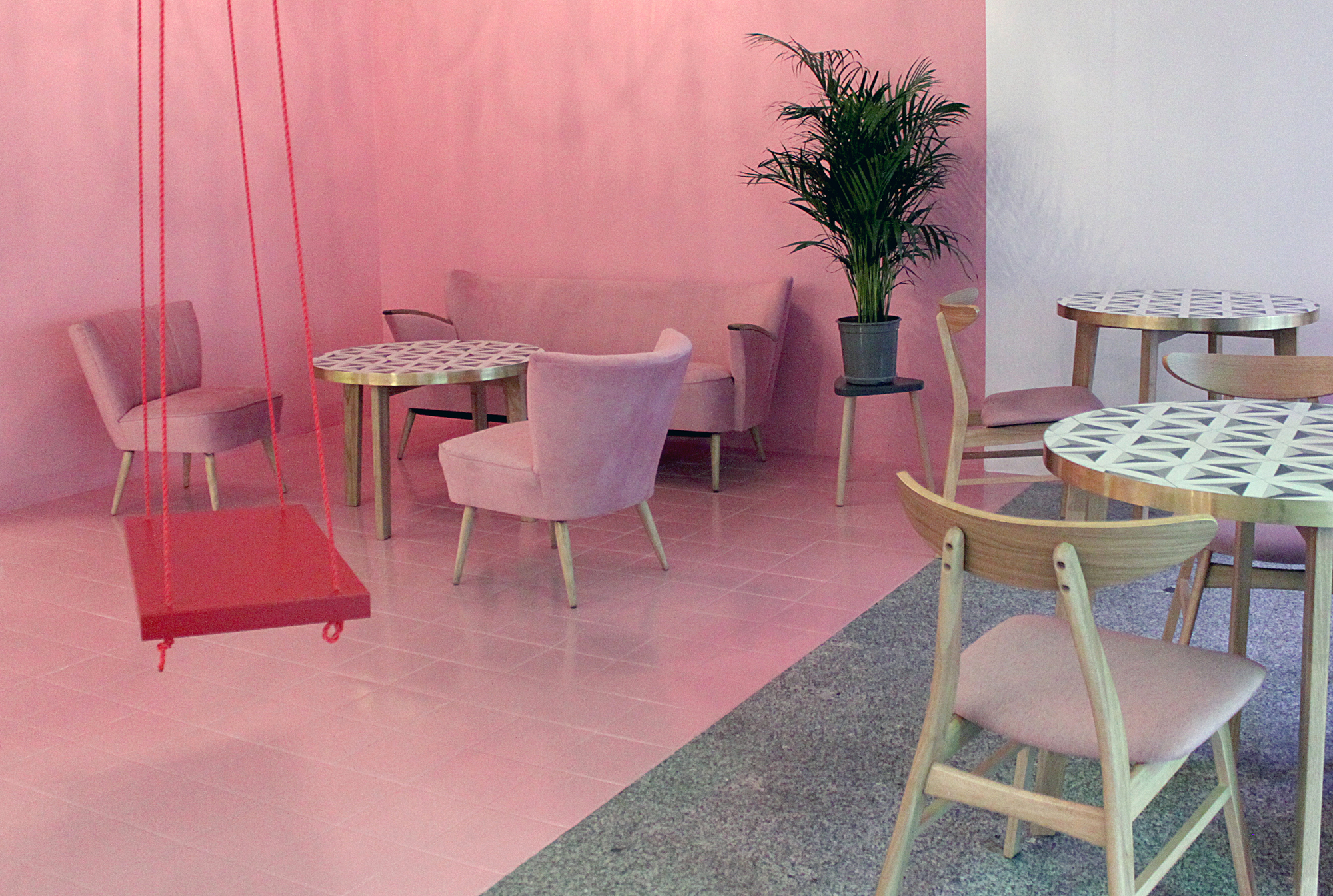 Let’s be honest here – pink coffee shop is like a ‘ski-jump’ to a gastronomical business success. At least it has been for the last couple of years, since Instagram is around. The Insta-hunters (including, I have to admit, me) keep searching for those fetching places, as they remain the most photogenic ones. Let me say – I have always been a fan of those cute coffee shops, especially the small ones with a soul. It’s not like I don’t appreciate Starbucks, but visiting a new city means searching for the cutest coffee shops! Why? Visiting one of those places makes you feel like you are a part of a city you are currently visiting. And you can lurk some really well-dressed, interesting people just living their lives. You can also get inspiration from the interior! There is always something I spot in a coffee shop that I want to have at home ( I will surely run out of space in the nearest future…).Lastly, the most important feature, those coffee stores usually serve some unique beverages and pastries! Something that would make you want to come back there! 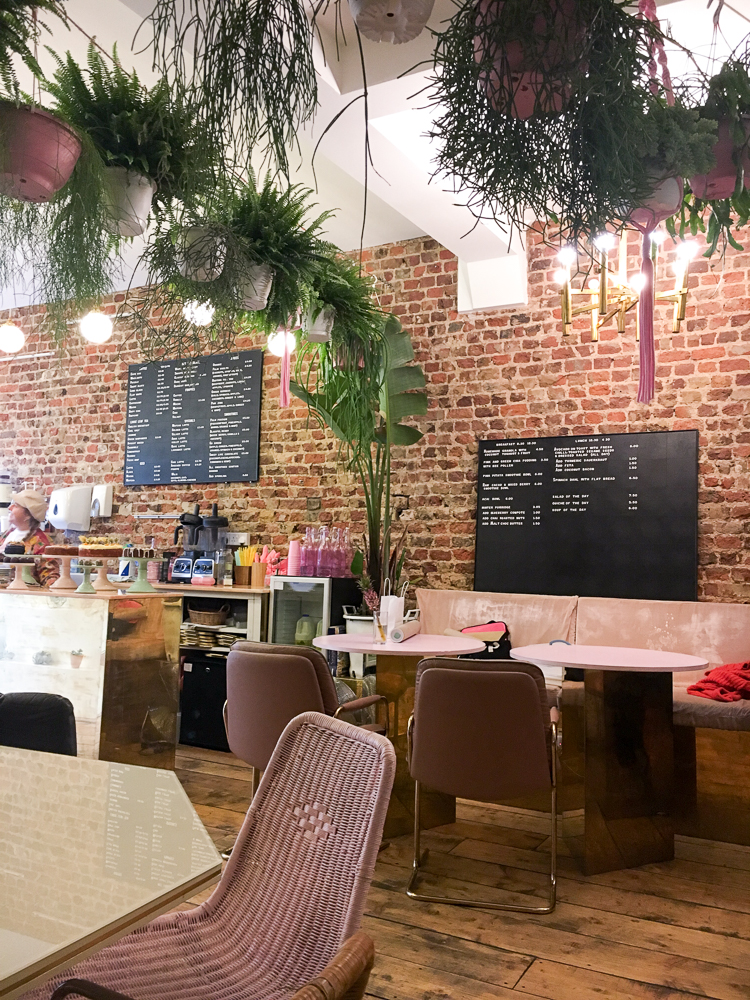 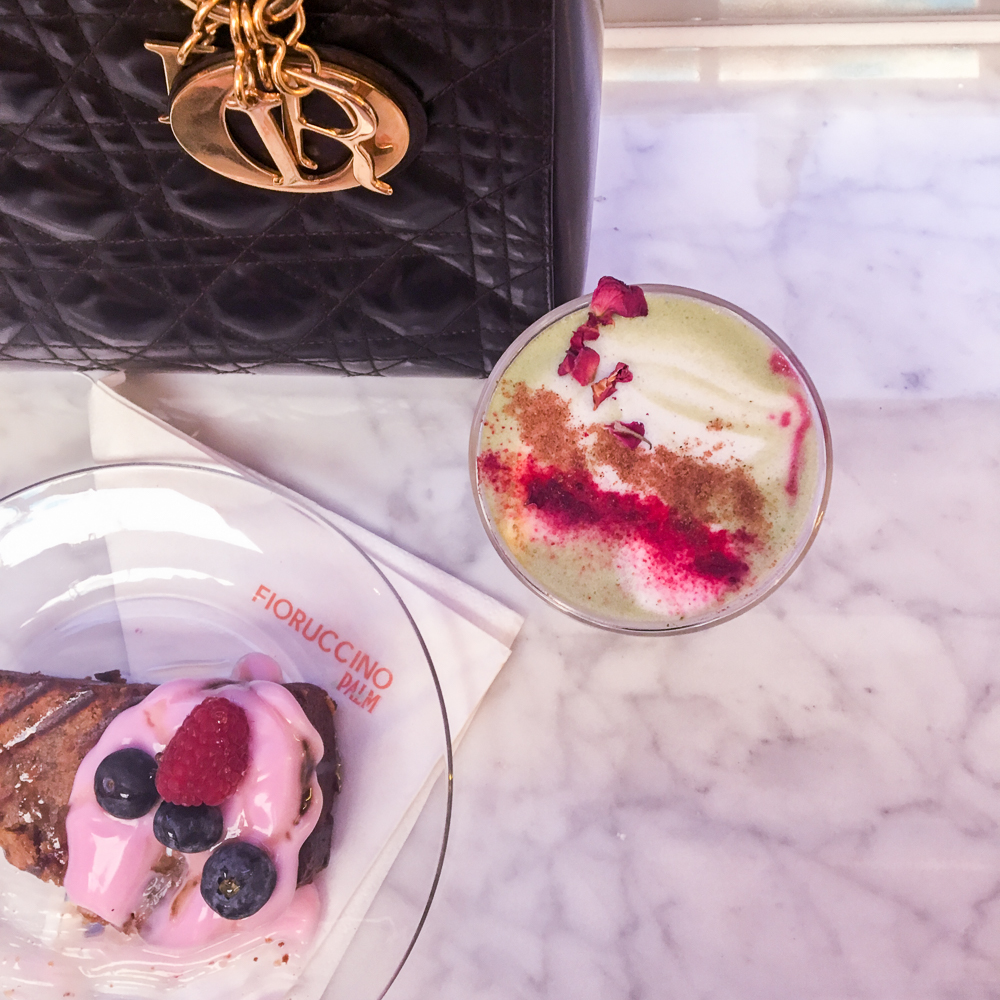 Cute, pink and tropical little café in Hackney. I love this place for its vibe and the lovley pastel-tropical interior. Pink decor mixed with some exotic plants makes a really good impression, and you can actually feel like you are in Los Angeles. They haven’t become one of the most Instagrammable places in London for nothing 🙂 Palm Vaults also opened in Soho under the name Palm Vaults Fioruccino in a Fioruccino store – it might not be as pink in there, but it’s a lovely place to step by and have a cake. Their signature unicorn latte might not be as tasty as the beetrot drink at Palm Vault’s Hackney, so I would just skip it and order a regular coffee 🙂 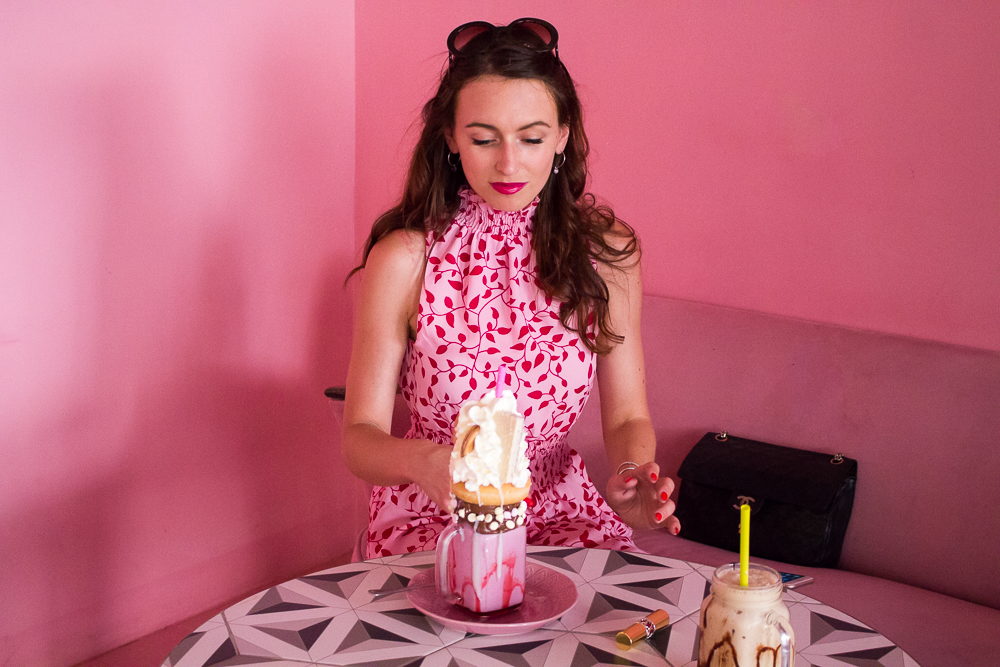 The place every Instagram-aware person from Warsaw is talking about. They not only have this cute all-pink-everything interior, with the swing hanging in the middle of the room, but what they serve also matters.  Just look at their pink shakes! The way I see it, they are inspired by New York’s iconic milkshakes topped with every possible caloric extras. For me it made a great picture requisite, for my boyfriend it was a bit too sweet, but there surely are loads of sugar-tolerated people who come there for a little treat. Ideally, the idea of this place was to combine ‘food porn’ culture ( which stands for Instagrammable food and drink) and Parisienne chic conditorei. Did it work? You should see it for yourself. 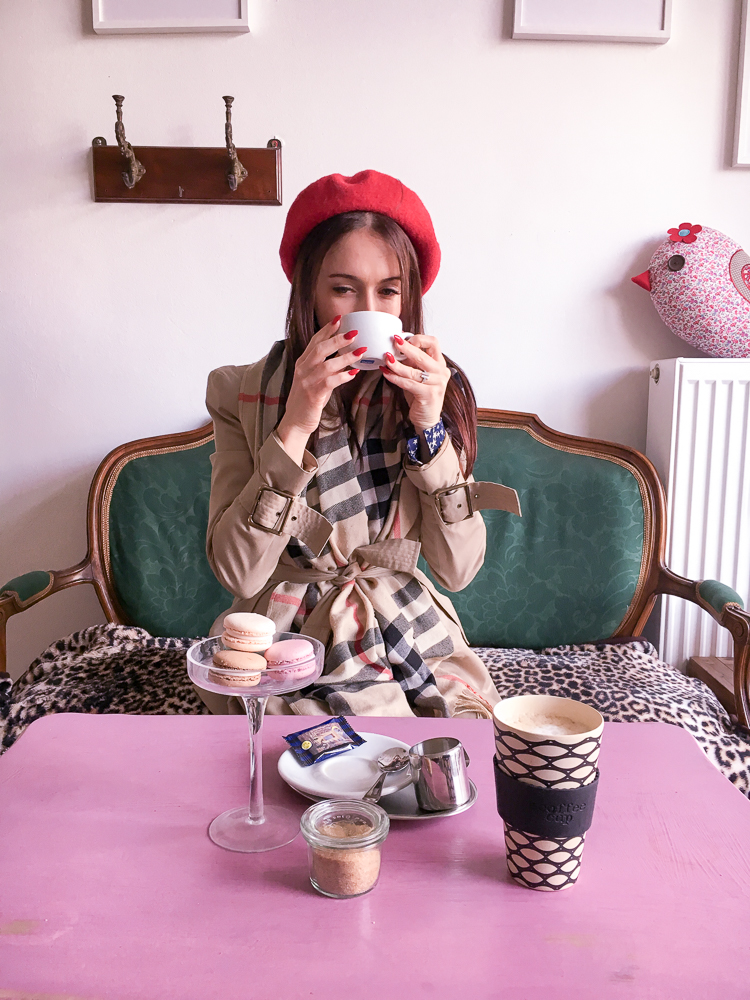 The best places are the ones found by an accident. I passed through Bundesplatz thousands of times, but never really paid attention to this coffee shop. I was wrong! I don’t remember what brought me to Café Adèle, but I am happy it did! Café Adèle comes out super cute and a bit ‘trashy’, but in a good way. The furniture don’t match, and the walls are slightly scrapped, but in a well-thought way, as I am sure it is meant to look that way. A bit of Paree in Berlin, while still keeping the coolness of Berlin’s vibe! You should come by for sure, perhaps after a long day of sight seeing on a bike? They sell some really tasty home made macaroons! 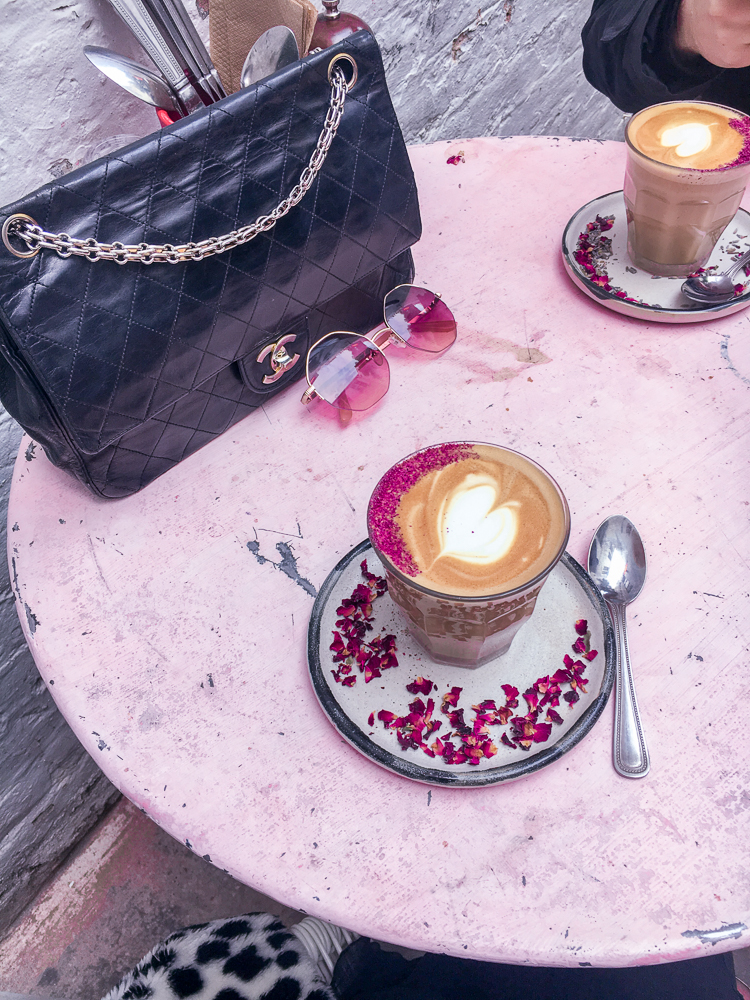 It is not exactly as pink as all the previously mentioned coffee shops, but it is located in Portobello, which kind of makes it pink ‘soul and life’. One of the most popular café among Londoners. In fact, there is a new Farm Girl venue opening up in Chelsea, which I am looking forward to visit! Farm Girl is runned by an Aussie couple, who definitely made everything in their power for this place to have this cool ‘raffish’ Aussie vibe! The coffee shop is hidden in the back yard of Portobello, but nowadays you won’t really have troubles to find it – there usually is a massive queue formed in front of the venue. My tip? Make sure to NOT GO there on weekend, unless you really really want to.Why? London life, what can I say – 100k people visiting Portobello Market from Friday to Saunday should be enough of a reason. 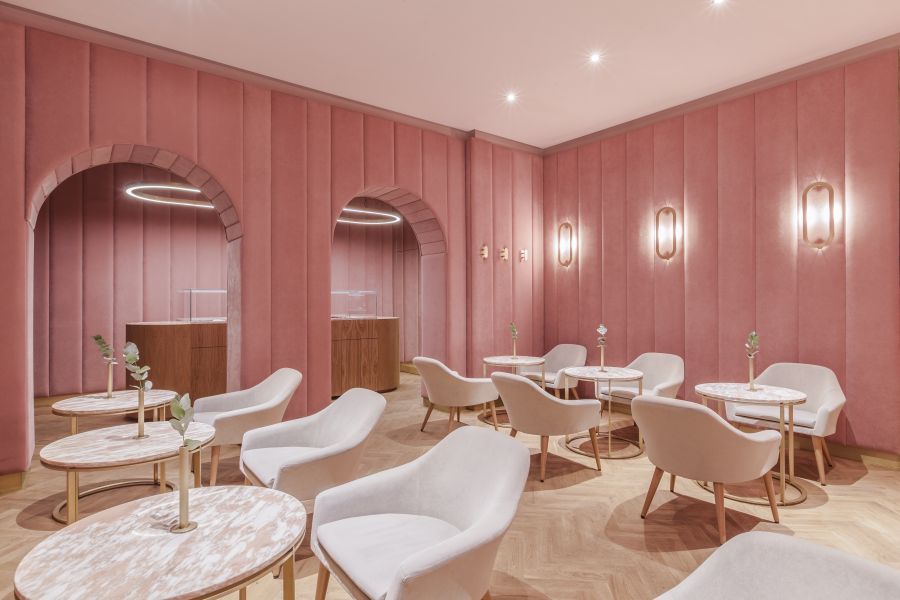 Nanan, one of the newest venues in Wrocław, was voted one of the most beautiful coffee shops in Poland ( Elle, Apr 13, 2017). To me, this place looks like it was taken from one of Wes Anderson’s movies, especially the famous ‘Grand Budapest Hotel’ for the colours, and ‘The Royal Tenenbaums’ for the overall vibe. In fact, Elle Poland stated the designers were inspired by the famous ‘Mendl’s’ candy store from Anderson’s movie, so my impression is on point.  Nanan is, unlike previously mentioned venues, more of a dapper than cute. The interior was designed by BUCK.STUDIO. The place opened a bit over a year ago, and instantly become one of the top places to go out in Wrocław, whether it is for a coffee with a friend or for a glass of Prosecco.