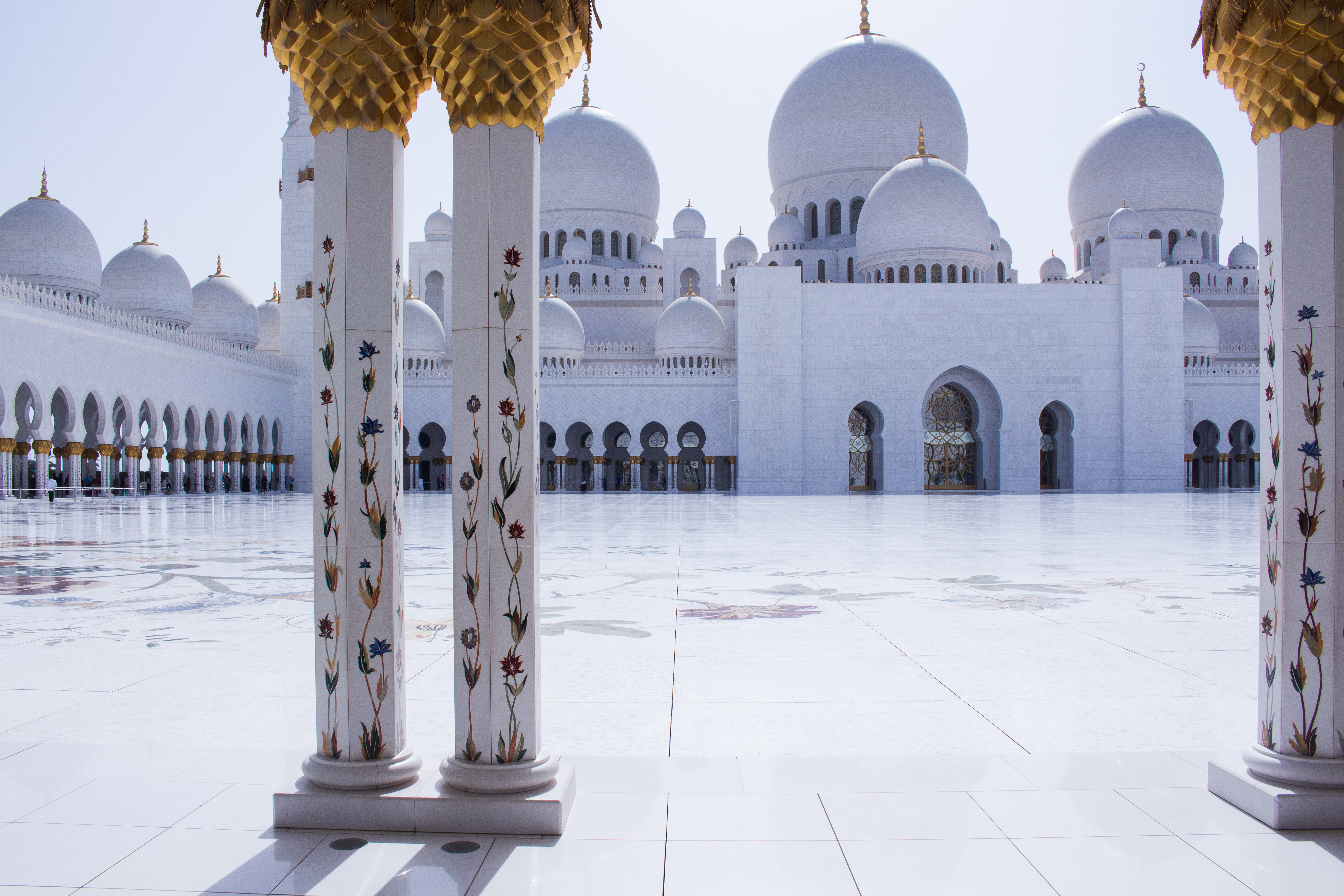 Should you consider travelling alone to such a controversial country as UAE? Is it safe? How much would it cost you? Is it not considered ‘out of tact’ in a Muslim country?

Well, the way I see it, UAE is the SAFEST country for a solo female traveller. I have never felt safer during my travels – whether it was with my fiance or on my own. The law in UAE is very strict and does not allow criminalists to stay in the country.

I visited UAE for the purpose of attending the Arabian Travel Market in Dubai but decided to extend my stay and visit the capital city of the Emirates as I have never been to Abu Dhabi before. I have always wanted to experience the sights, the vibe and be able to write about my solo travels from such an experience.

My visit was rather short and I would say quite of a ‘retreat’ mood. Ideally, I wanted to relax in a lovely 5star hotel and picked the best sights of Abu Dhabi, as I was there for only 2 days.

I have chosen Dusit Thani Abu Dhabi for my very first solo travel. I had a feeling it is going to have this ‘outter’ mood as it is located in the south from Corniche Road and Corniche Beach (considered ‘the heart of Abu Dhabi’). The main and most fancy feature of the hotel is its elevator. Not only it does look great on the ground floor, but going up allows you to see the capital from a very good angle.

I got a room on the 31st floor, which means I had a very impressive panoramic view. I really enjoyed sitting by the window with my coffee and Vogue Arabia ( did you know they also sell Vogue Men in the UAE?).

My main point, however, of staying at Dusit Thani was the rooftop pool. As a solo traveller, I made some points I would be looking at. It was important the pool area looks great, chic and has some really cool enjoyable views. At the end of the day, I was meant to spend the majority of my time enjoying some ice cream and me-time by the pool. 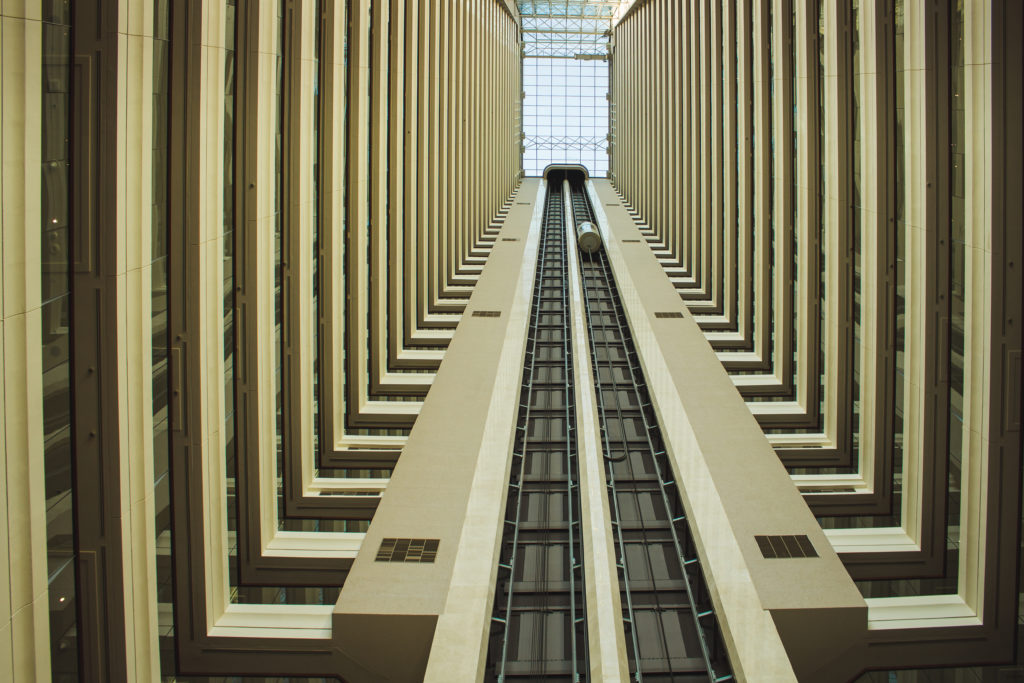 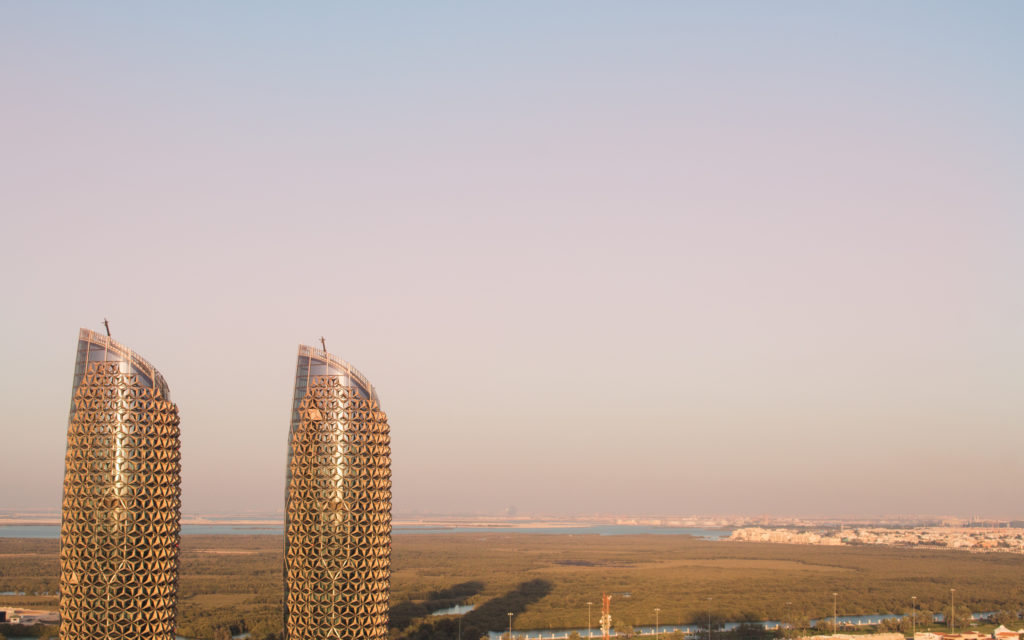 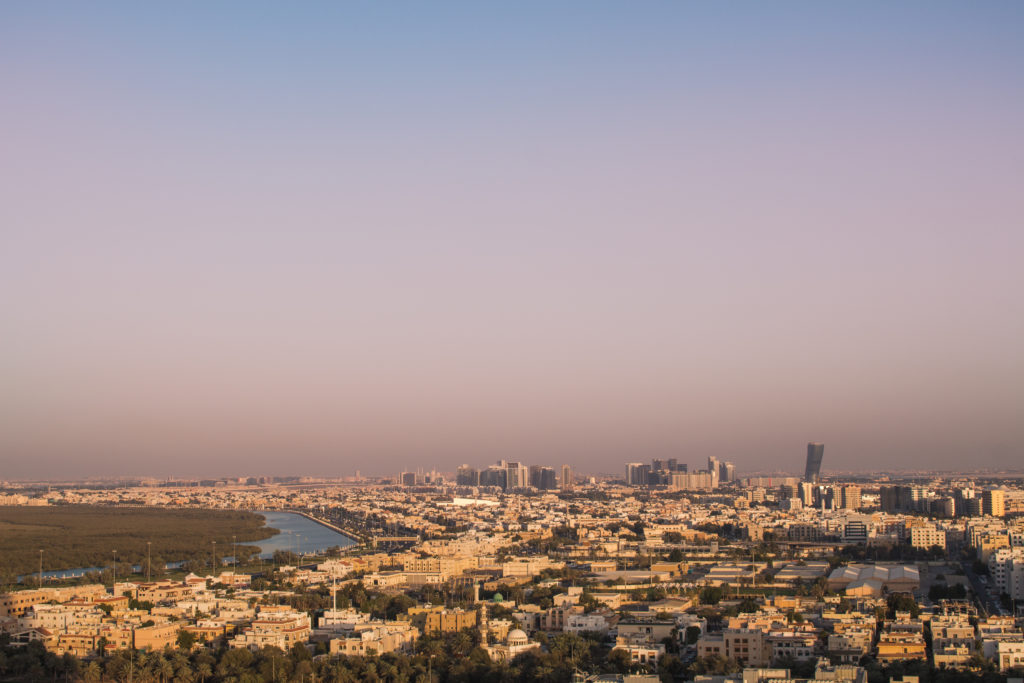 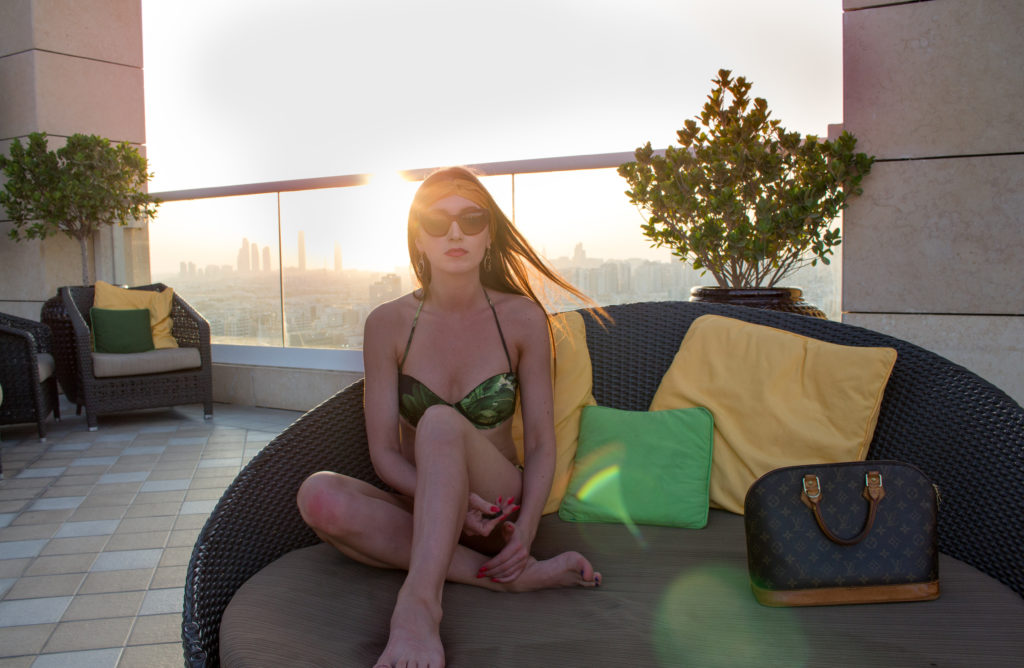 What would the luxury travel be without some luxurious items? For my trip to UAE, I was accompanied by Smeralda Swimwear bikini. It is safe to say I have never had a better-fitted bikini. Smeralda swimwear is inspired by the Caribbean and the Latino culture. The newest collection is kept in a bohemian yet very chic mood. I have chosen the exotic print as it was also voted as one of the hottest resort trends of the S/S 2018 season. 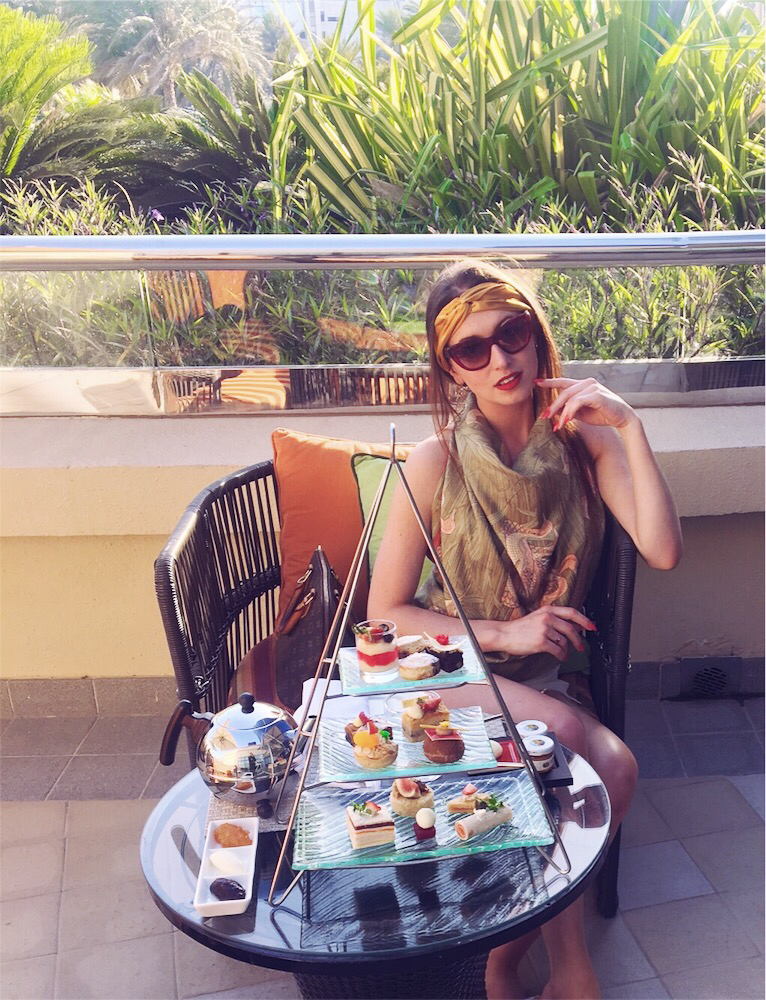 Instead of a fancy dinner, I decided to choose an afternoon tea. Less healthy option, but I was on a luxury female holiday alone – can I not treat myself sometimes? Smoothies and the ‘healthy stuff’ were served for breakfast.

My blogger/photographer tip – make sure to set yourself in a good place for watching the sunset. The sunsets in UAE are known for being exceptionally wonderful – with all the magical colours and the purple afterglow they make quite of a show! Watch them from the rooftop pool or from the beach. 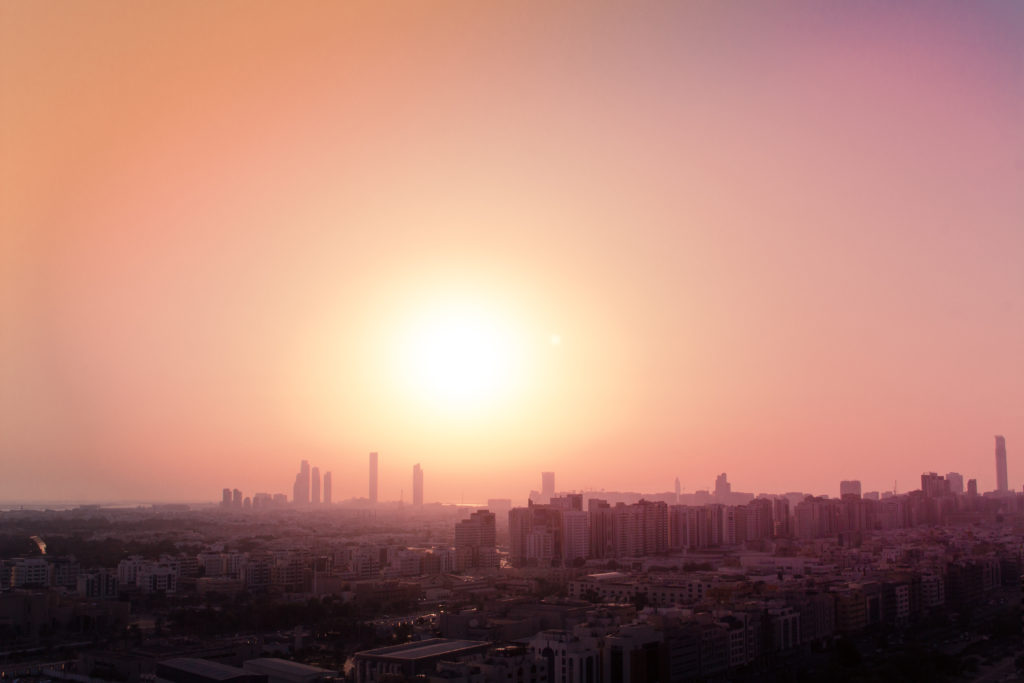 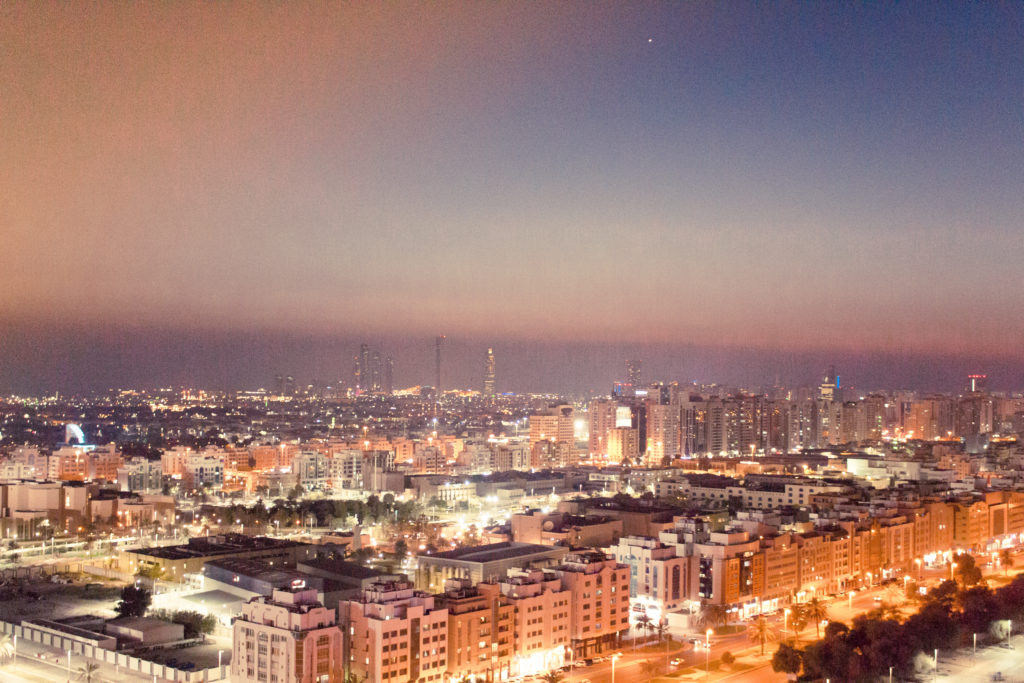 The first point of my short sight seeing was the Corniche Beach. I don’t think the beaches of Abu Dhabi could ever make the main reason for visiting the city. The public beach did not make a huge impression on me at all. I was told there were some really great beach clubs and public beaches, but I have still chosen to spend some time at my hotel. The entrance fee to the beach is approximately 17 AED (around 3 euro), which is not a lot in compare to the European standards, such as 20 euro for the sunbed in Italia.

From the Corniche Beach, it was only the stone’s throw to the Emirates Palace. It is a luxury hotel, operated by Kempinski, known from countless movies, such as ‘Sex and the City 2’ (‘Abu Dhabi Doo <3’). The hotel contains countless shops, restaurants and luxury suites furnished in gold and marble. It has got its own marina and the beach. The price of 1 night at the pearl suite is around 300$ excluding breakfast. It is around 1700$ less than the price of one night at Burj Al Arab. Which hotel would you prefer?

I visited Emirates Palace in order to spend a lovely morning with myself and my 24 karat gold cappuccino – an iconic coffee served at the Emirates Palace. It is a standard cappuccino dashed by…. 24 karat edible gold flakes! I name it a must-do while travelling to UAE, especially solo. Treat yourself, ladies! 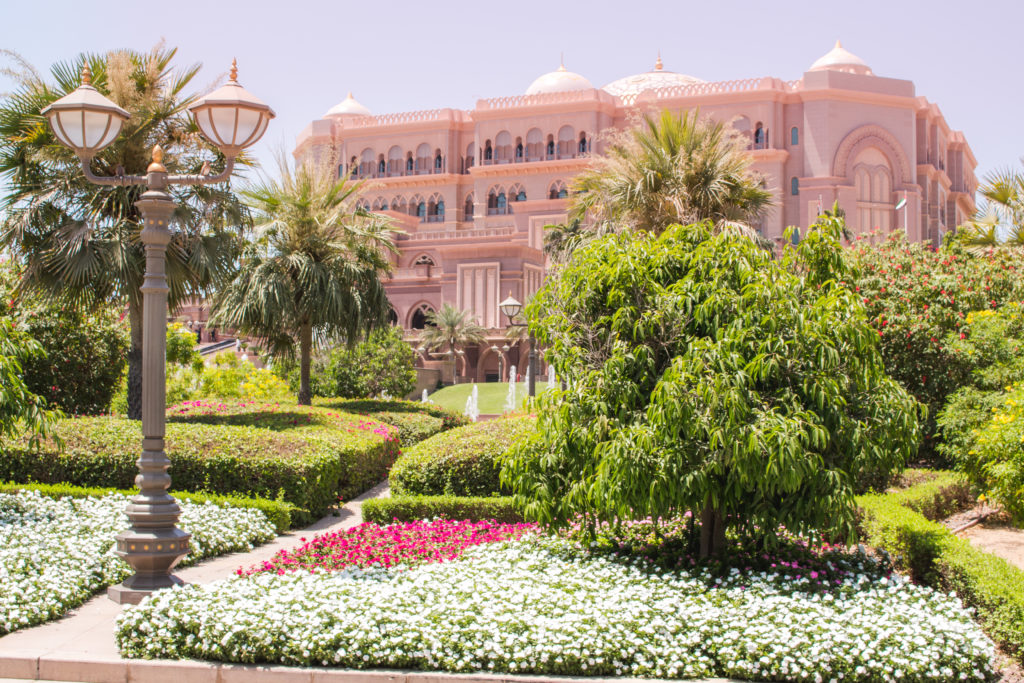 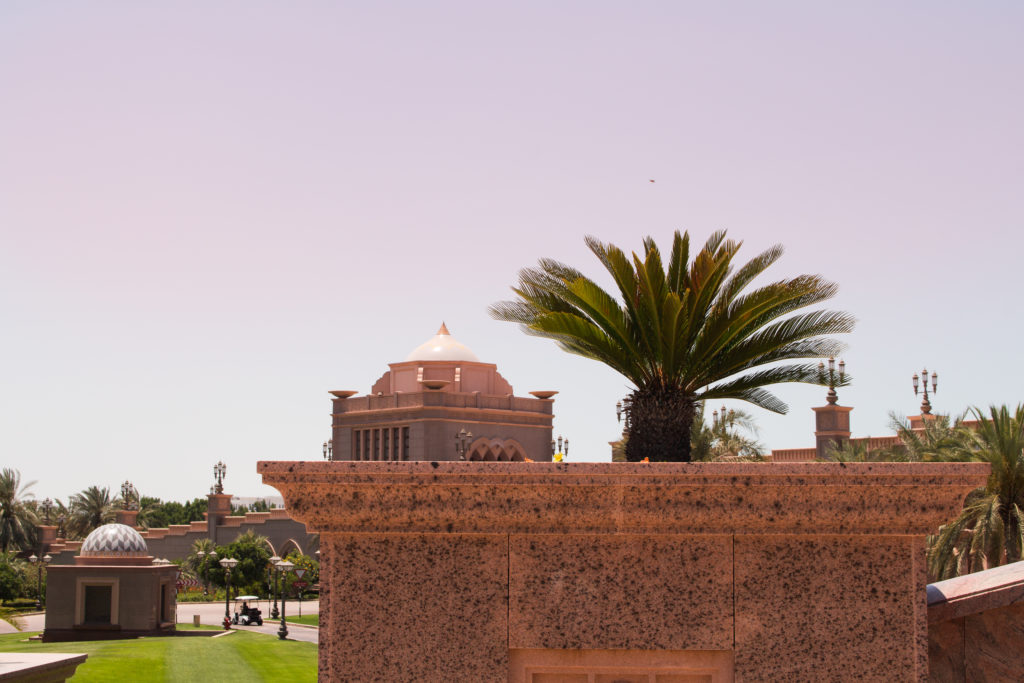 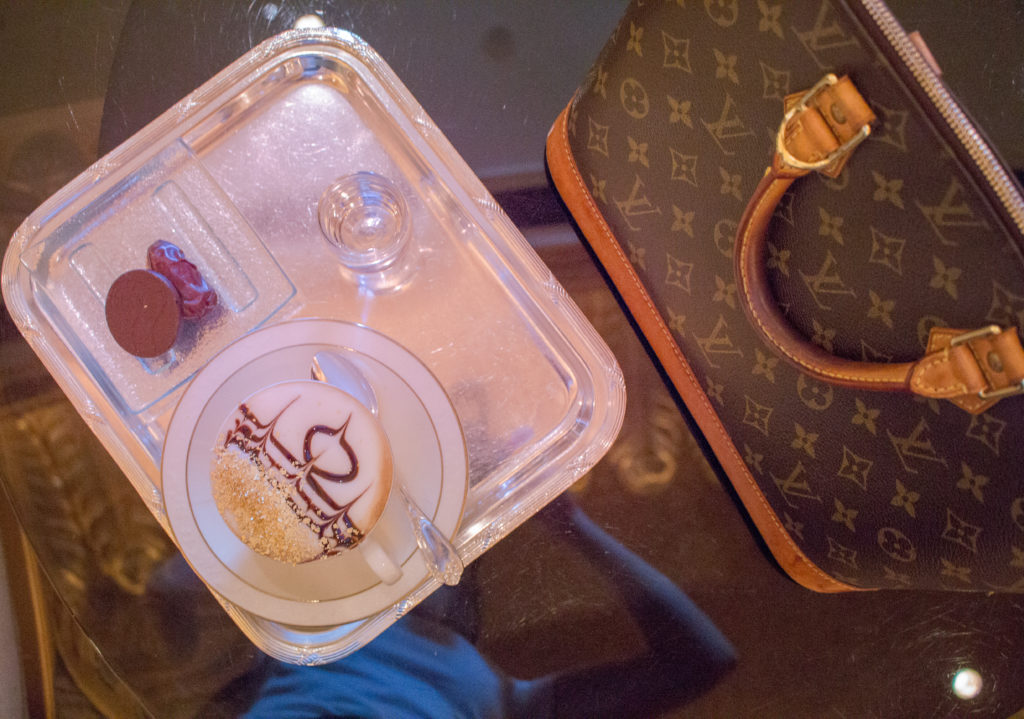 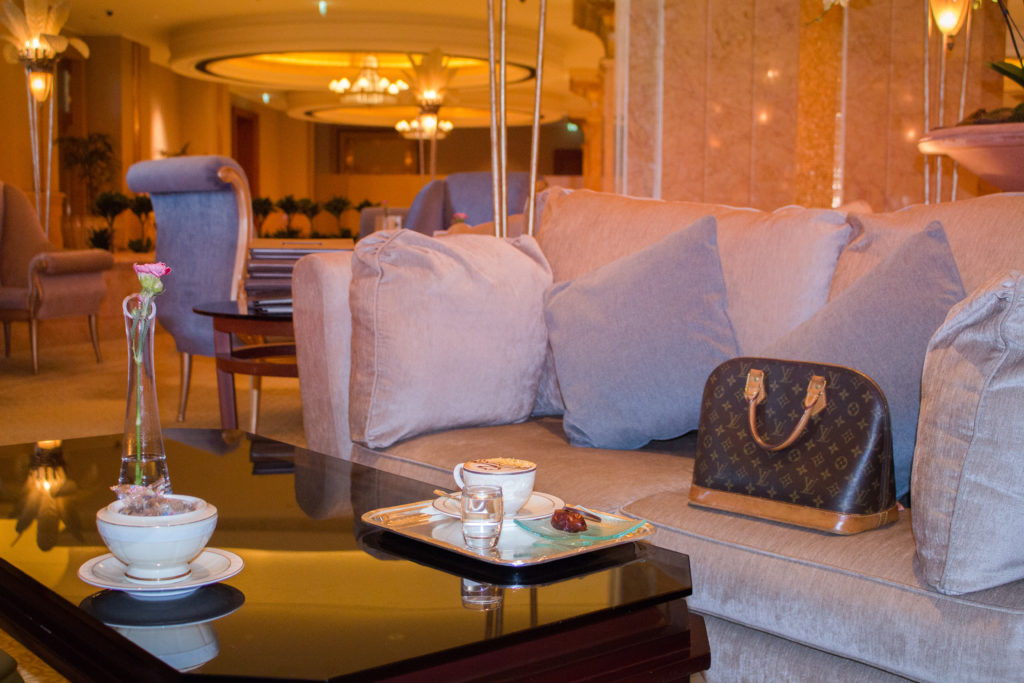 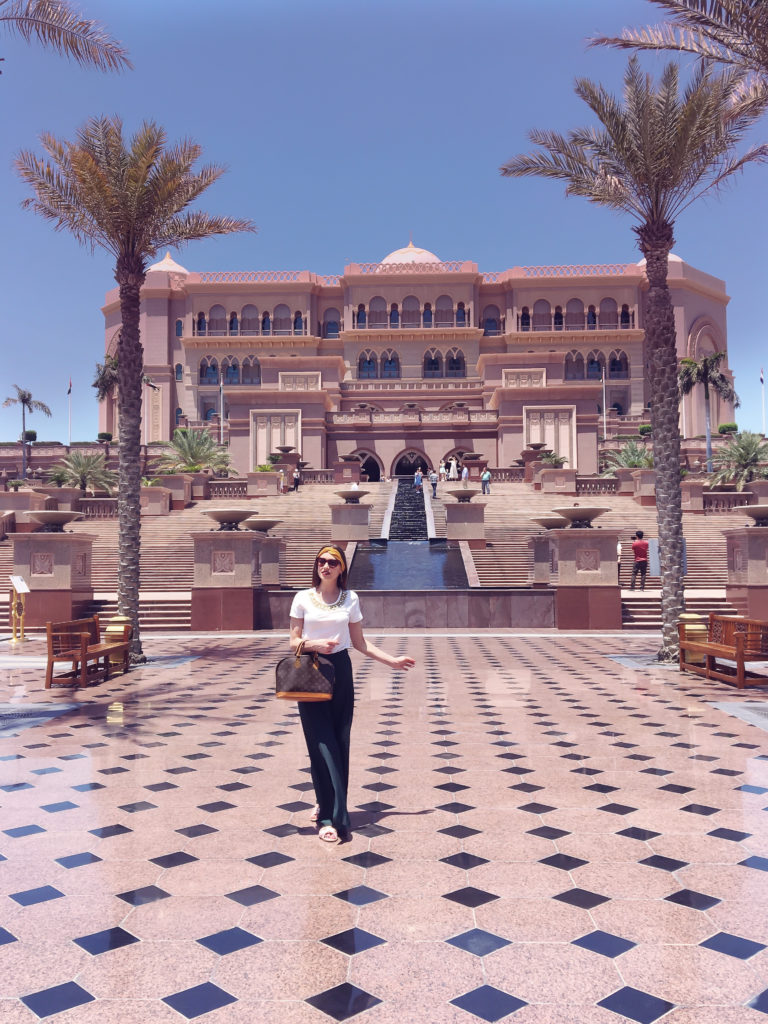 I decided to visit Sheikh Zayed Mosque before 12:00 AM. April in UAE can surprise you with its temperatures reaching of up to 40 degrees. I assumed the Mosque will be very crowded, but it was my only opportunity to visit this magnificent piece of architecture. I got to the place around 11:30 and I was impressed by how smooth and quick the check-in goes. I also didn’t consider it crowded at all – in compare to London’s tube during the rush hour everywhere seems to be empty.

There are no entrance fees, but you are required to wear an abaya. You can come in dressed in yours if you have it, but you could also rent one (free of charge). The sightseeing takes around 1 hour, and to be honest I think I have to come back in order to find out about the history of this place. There is the whole variety of tour deals, but it is required to book such tour prior to your visit. I knew about it, but I consciously skipped it. I plan to come back to the Mosque in October with my fiance – this is when we will definitely book ‘a proper’ tour. 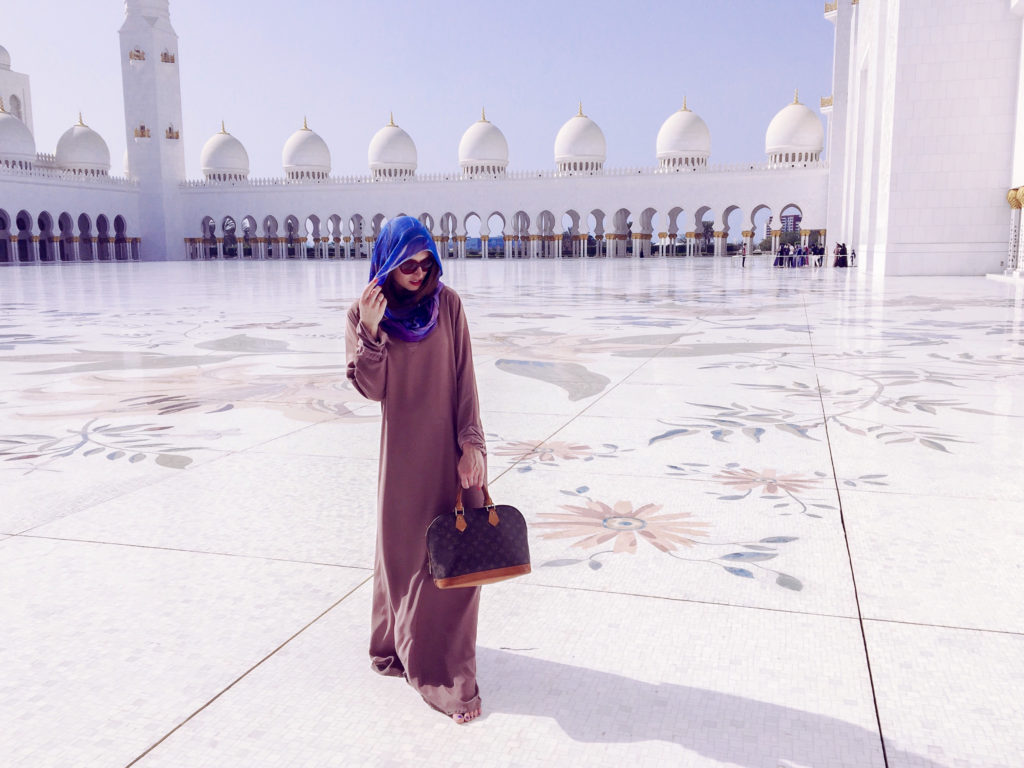 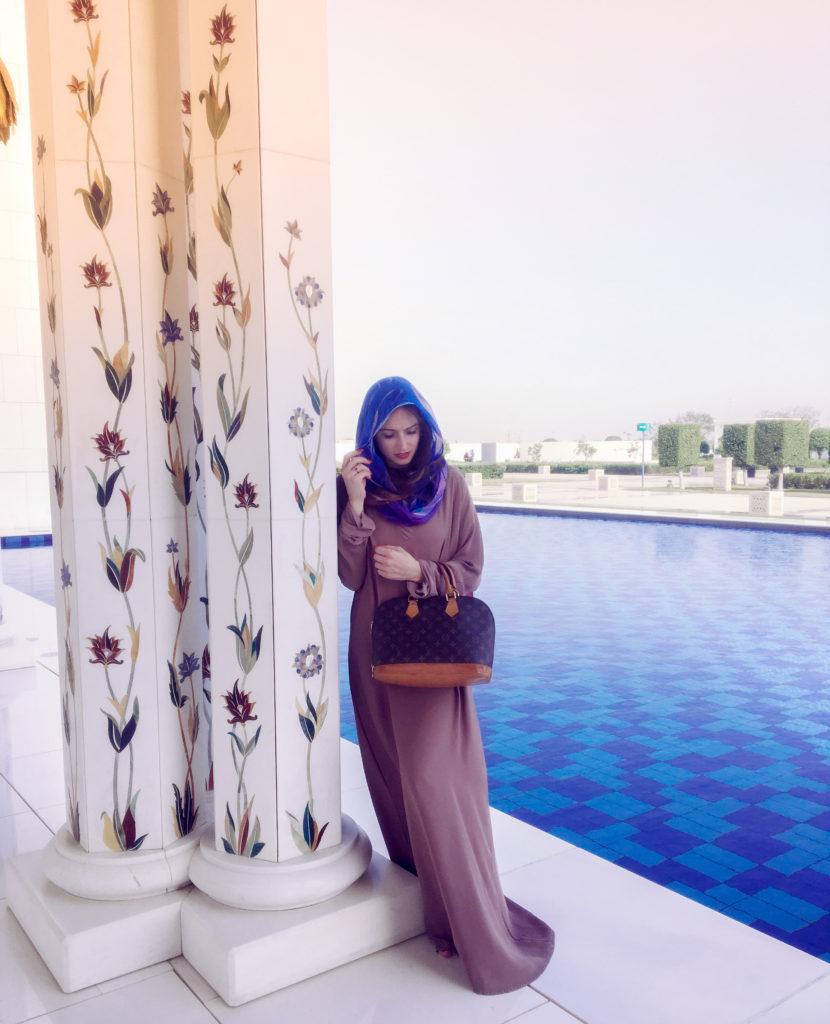 In general, I think Abu Dhabi is a very beautiful destination. It has to be mentioned the capital of UAE is way stricter than Dubai. The clubs and bars aren’t so ‘exposed’, and the Muslim culture is much more ‘leading’ – in a sense of an overall etiquette. There is no such thing as a public transport. In Dubai, you could travel by tube, the bus or the trams of Marina district. In Abu Dhabi, it is better and wiser to travel in a private car or a taxi. I got around in a cab, which I thought was the best option. For the distance of 14 km (20 minutes), I paid 30AED (around 7 euro). The connections to Abu Dhabi and Al Maktoum airports are also very bad or next to none. I would strongly advise taking a taxi to get to your hotel.

You should also double consider your wardrobe. It is expected that you wear garments that would cover your legs and arms – you should definitely not be ‘exposed’. Unless you are in a hotel or at a resort. Be respectful.

What was I struggling with the most?

As a travel writer, I was struggling with taking photos. The tripods aren’t allowed in many iconic areas – they are considered a professional equipment and you have to own a permission to be able to use them. On the other hand, thanks to that particular restriction I made a friend at the Mosque.

As a female traveller, I was not struggling with anything at all.

When is the best period to visit the city?

As previously mentioned in my Dubai post, from November to March/April is the most suitable period to visit the UAE. I was there just in time for the weather changing – at some point, it was too hot to be able to fully enjoy the sightseeing or even sunbathing. The majority of hotels and travel agents warn their clients from choosing the European summer time as their Abu Dhabi holidays. It might appear to be just too hot for you to take delight from your journey. 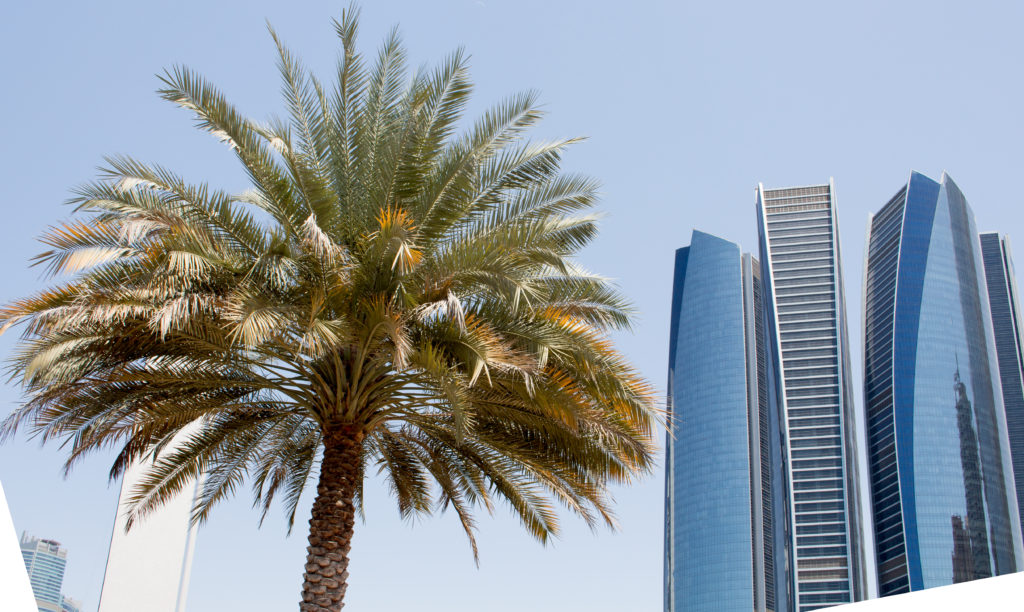 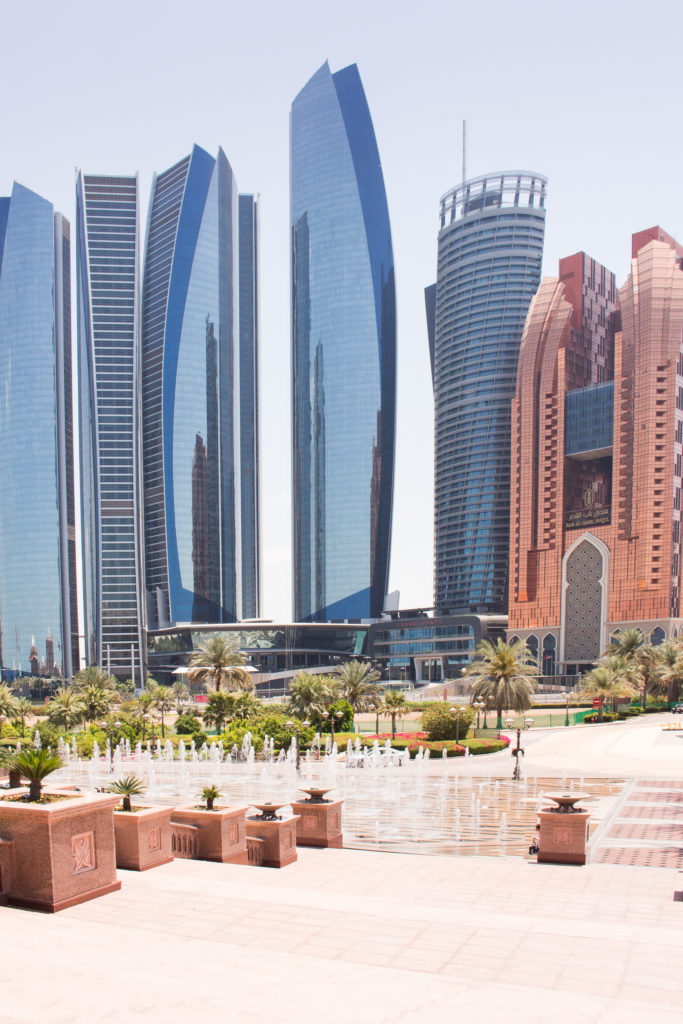